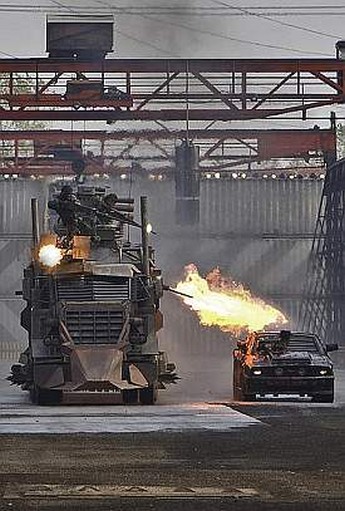 The main purpose of this film is to remind me of why I dislike NASCAR so much; apart from the crashes, it’s intensely boring, and much the same goes for this movie. Take away the things – usually cars – hitting other things and there isn’t enough to sustain interest. Certainly not the satirical elements of Paul Bartel’s original: while crap in many respects, it gleefully took the race onto the public roads. On the evidence here, I doubt Anderson knows who Thomas Paine is, never mind having one of his descendants as a character. In the remake, everything is kept inside a maximum-security prison, with Jensen Ames (Statham), brought in by Warden Hennessey (Allen) to boost ratings by becoming the next incarnation of Frankenstein, a masked driver who is only one win away from obtaining his freedom. Standing between Ames and victory is Machine Gun Joe (Gibson), a rival driver also closing in on liberty. And a host of cannon-fodder, who are (literally) wheeled-on, purely so that they can be…well, wheeled on.

The inventiveness of the carnage can only be admired – I was particularly impressed when Hennesey brings on her own weapon, a supercharged death tanker that meets a quite spectacular end. Statham is probably the best choice for the role, but I’m not sure this role is the best choice for him: being stuck in a car cramps the physical presence he is capable of bringing to the screen. Anderson directs (and writes) as if he were adapting a video game, something he has done on multiple occasions before, to better effect [Mortal Kombat comes to mind]. It is, however, unquestionably a very loud movie, so if you’re looking for something to work out those rear speakers, or if you have a fondness for car porn, this will serve those purposes adequately. The rest of us: not so much. In the original, you scored bonus points for kids under 12, women and senior citizens, and it ended [I think the statute of limitations covers spoilers on films over thirty years old] with the hero assassinating the US President. I yearned in vain for anything remotely as subversive to pop up in this remake.