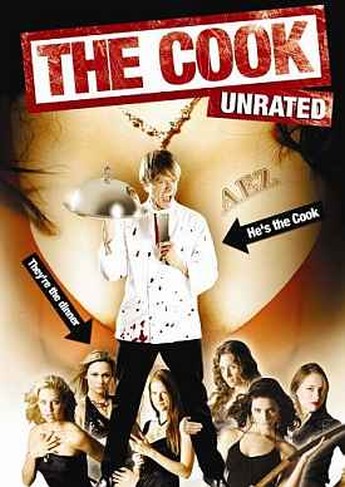 When most of the Lambda Epsilon Zeta sorority sisters head off to Cabo for the weekend, a few are left behind with the new Hungarian cook (Hengst). Little do they know that he is really a cannibalistic psycho, who sees them as pieces of meat in the most literal sense – unlike the creators, who just view them as a collection of sorry, unfunny stereotypes. I don’t toss words like “misogynist” around with regard to horror: it’s far too often mis-applied. However, here, the loathing for every female character on view here and their unpleasant fate, combine to make me feel this could be the genuine article. Not that this would necessarily be a bad thing, if it was executed with any degree of style or wit. Instead we get dialogue which, going by all the drug references, must have been crafted at three in the morning after a long session of bong-sucking. It probably seemed hilarious to the writers then: unfortunately, it appears to have gone straight from there to the actors’ mouths, without any revision or improvement.

The DVD sleeve even wears the stereotypes as a badge of honour, listing them off. However, pointing out that your creations are one-dimensional does not excuse it. Indeed, it probably makes things worse to acknowledge their shallowness, then make no effort to correct it, unless you’re aiming for satire – and given the complete lack of laughs to be found, the movie is a wretched failure here too. [The initials of the sorority are likely the high-point] Hengst, with his dialogue almost entirely in Hungarian, does his level best to bring some pizzazz and life to his one-note character, and is about the only salvageable aspect of the whole sorry endeavour. The horror-comedy genre is a difficult one to pull off for the best film-makers, and it’s obvious that no-one remotely in that class was involved with this production. The humour is non-existent and the horror falls almost completely flat too: it qualifies far more as a horrible comedy than anything else.