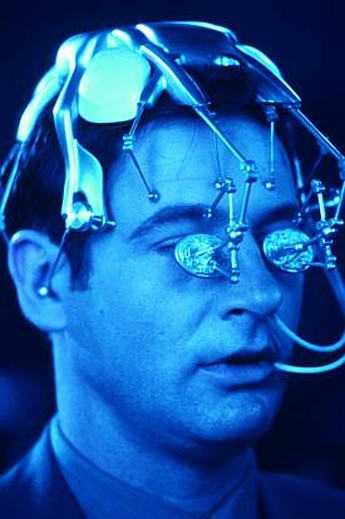 Phillip K. Dick. If you scope out any other reviews, you’ll almost inevitably notice that name cropping up, for this is probably the most accurate cinematic adaptation of his work yet, with its themes of identity, mind-control and a corporate-controlled future. Which is odd, since PKD had nothing to do with this at all. Morgan Sullivan (Northam) is a meek-mannered businessman who, to break out of a humdrum life and loveless marriage, takes a job as an industrial spy for Digicorp, tapping its’ rivals secrets, by attending conferences and recording the speeches. However, on his first mission, he meets a mysterious femme fatale (Liu), who eventually convinces him things might not quite be as they appear.

Okay, scratch “quite”. Make that “in the slightest”, for this is a head-spinner in the extreme, where no-one is quite what they seem – or, quite possibly, even who they think. Initially, it’s quite a trip, but eventually, your brain will just shrug as the twists keep coming, and as a result, you may spot the big one at the end before it arrives. It’s still an interesting mirror-image to, say, Total Recall: while that was an unashamed crowd-pleaser with occasional hints at intelligence, this is a brain-stretcher with occasional explosions. Northam is great, in a very challenging role as a man whose identity is collapsing and congealing at the same time, while Liu is solid, albeit in a part that’s hardly a stretch.

The look is also interesting – though the film literally jets around between San Diego, Buffalo, Boise and Kansas, it all looks the same. The setting are mostly hotels, airplanes, convention centers, company offices, with the colours all bleached into a sameness. But there’s a lot going on beneath the surface – again, literally – and the film then blossoms with an impressive visual style, reminiscent of Brazil. It does derail somewhat in the end, with a finale that isn’t as thoughtful as the rest of the movie, yet on the whole this is smartly-written, well-acted and elegantly-directed cinema.