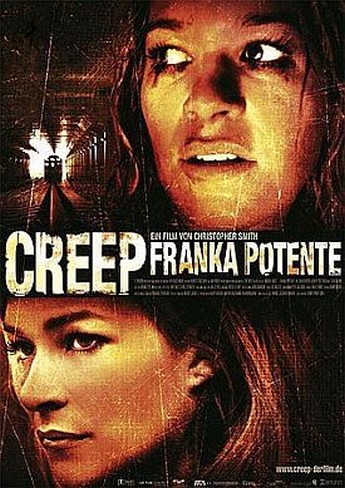 I remember seeing Death Line at the Scala Cinema as one of their all-nighters, but it seemed largely forgettable at the time, except for Donald Pleasence demanding tea in every other scene (or maybe it just felt like that). Still, the basic principal – cannibalistic degenerates infesting the tunnels of the London underground – seems a huge influence here, though Smith denies having seen the flick which preceded his by thirty years. In this one, there’s only a single ‘mutant’ (Harris), who appears to be left over from some dubious medical experiment, and bears the name of Craig. He pursues Kate (Potente), who falls asleep while waiting for the last train, and ends up locked inside Charing Cross underground. A sleazy admirer tries to take advantage, but he is yanked away and killed, which us when Kate realizes there is something very wrong going on. With the help of a homeless man (Rattray) and a sewer-worker who was abducted by Craig, Kate has to try and get through the night before he can re-enact some of the medical experiements he witnessed on them.

This is largely complete nonsense: there’s a billion ways Kate could have got help [such as calling 999 from a payphone, which requires no money], and when it comes down to Kate vs. Craig, she behaves in the most idiotic manner, fulfilling just about every horror cliche ever. That said, it’s not without its pleasures, even if some of those were ones we provided. We frequently found ourselves humming the Run Lola Run theme as Kate scurried her way through the tunnels; seriously, a career as a Dr. Who assistant was hers for the taking. There are some amusing moments of sarcastic British humour, such as Kate’s effort to convince the security controller of her plight, and there are also a couple of decent kills [the grim fate of one homeless person is likely the most impressive]. However, while there’s no denying the potential…well, creepiness of the Underground late at night, you’d have to be very forgiving to gloss over the problems in the script, to claim this is much more than forgettable nonsense.