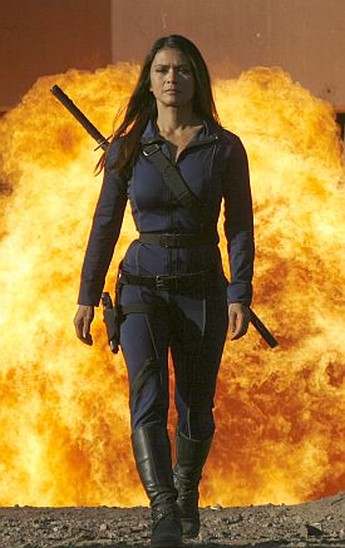 Note: not Battle: Los Angeles. We were going to see that on Saturday night, but the reviews mentioned that it was 90 minutes of shakicam. Memo to film-makers: if that is the only weapon in your locker to convey urgency and a sense of “being there,” we’re just not interested. No money from us for you. So, instead, we watched the SyFy/Asylum “mockbuster” [with the title’s “of” in teeny-tiny type on the poster!], even if it is probably closer to Independence Day than anything else. The central character is Lt. Tyler Laughlin (Mitchell), whose base is destroyed in the first way of attacks, after a two-mile wide UFO arrives above LA. With the craft comes a returning US aviator from 1942 (Vox), who appears to hold the key to the invasion, and Laughlin is part of a team ordered to take the time-traveller to HQ. On the way, they are saved by Karla (Peeples), a black-clad, katana-wielding part of Majestic 12, but on their arrival at their destination, the team find out that things are not quite as they seem. It’s up to Tyler and Karla to board the mother-ship and save humanity by parking the massive craft on top of a less-expensive suburb.

There’s certainly no shortage of action: the film hardly pauses throughout its ninety minutes – and, please note, Atkins doesn’t feel the need to wave the camera like it’s being operated by an ADHD toddler. However, the downside is some painful scripting and characters which, with the exception of Karla, are largely ripped off from far better movies: Mitchell’s acting coach must simply have given him ID4 and told him, “Do Will Smith.” It also can’t be denied that the Asylum’s FX budget is some way short of portraying the necessary destruction, and there are far too many moments which made us cringe, e.g the ramshackle abandoned property standing in for a National Guard airfield, or the gratuitous cartwheel one character does before shooting at the aliens. What, turning around was too much trouble?

And yet… Even if the scope is far too much for the resources, there’s a loopy imagination at work here, building to a confrontation with the Cthulhu-esque monster at the heart of the mother-ship. As noted, there isn’t a lot of slack in terms of pacing, the script galloping from one set piece to another, and I was confirmed in my belief that any movie is immediately improved by the arrival of a sword-wielding chick as a central character, walking in slo-mo away from a giant fireball (right). With hindsight, I might have done better to restrain my interest in that angle, given the scornful gazes Chris directed in my direction thereafter. Letting out a “W00t!” may have been a fatal mistake. Anyway… While you can’t deny the obvious, massive flaws, I think we probably made the correct decision: this was a cheaper, more relaxing option, and in terms of logic and overall sentertainment, likely wasn’t far off the mark.