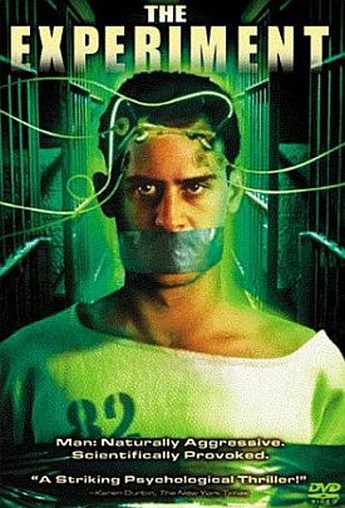 In 1971, a famous psychology experiment took place at Stanford. Students were assigned to roles as “guards” or “prisoners” in a mock jail, to see how much they would adopt their characters. Things rapidly got out of hand, with the guards abusing the prisoners – who tolerated it. After only six days of the planned fortnight, the experiment was abandoned, before matters escalated completely but this film wonders what might have happened otherwise. It centres on Tarek (Bleibtreu), a former student now slumming it as a cab-driver – who is also going to write about the strange experiment for a newspaper, and does his best to disrupt proceedings, to make for a better story. He is opposed by Berus (von Dohnányi), a mild-mannered guard who develops a sadistic streak as the new power he wields goes to his head. The guards take control of the entire facility, believing this to be part of the test – leaving no-one left to oversee or control their behaviour…

Of course, the concept of dehumanization through authority is one with particular resonance in Germany. It’s not hard to see the parallels being drawn, especially given Tarek’s Turkish ethnicity (even though Bleibtreu has no such claim). However, the longer this goes on, the more implausible and stretched it seems, especially 30+ years after the Stanford experiments, with much more rigourous controls in place. It requires too much suspension of disbelief to accept that people would abandon their normal social restraints so quickly – and, indeed, doubt has been cast on the findings of the original study. In more extreme circumstances, I can see a Lord of the Flies mentality kicking in, but not when (as the guards do) you go home at night to your family. That’s the elephant in the room for this one, and it overpowers a potentially interesting premise, despite decent work from Bleibtreu and the other cast members.