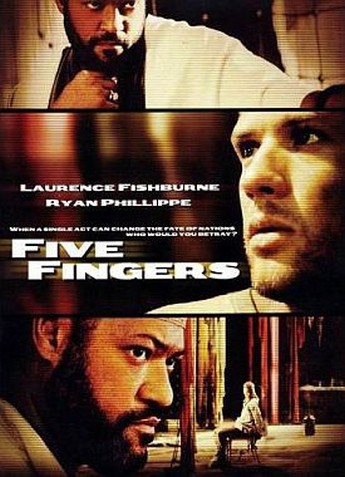 Former banker and jazz pianist Martijn (Phillipe) heads off from his native Holland to Morocco, to start up his charitable food program. Almost on arrival, he and his companion are drugged unconscious and kidnapped. They wake in a warehouse, and Martijn watches in horror as his companion is shot and the corpse dragged away. He is interrogated by Ahmat (Fishburne), who wants information about the real purpose of his trip to North Africa, believing him to be a CIA spy. While initially civil, taking on Martijn in a game of chess, it isn’t long before the gloves come off for Ahmet and his associates: and the gloves aren’t the only thing being removed, shall we say [take a look at the title of the movie if you want an idea there. A paper guillotine, snips and a hacksaw are also involved]. So, where did Martijn get the million dollars to fund his operation? Are the intentions behind his presence as benevolent as he claims? Is Ahmet torturing an innocent man, or is there more going on here – on both sides – than there seems?

The script is the outstanding performer here, dishing out information at just the right pace to keep the audience interested, without the twists at the end coming as a cheat. I did call both of them in the middle, but was uncertain enough that it didn’t spoil the remainder of the movie. I do wonder why they got non-Dutch Phillipe and non-Moroccan Fishburne in their roles: if I were an actor from either country, I’d be peeved (the ending does at least partly explain one choce). However, neither embarrass themselves with their performances or accents, though there is a little too much polite chit-chat before we get to the digital meat of the proceedings. Once that arrives, however, it’s more than adequately gripping, with almost every sentence potentially changing the balance – or at least your perception of it, since the film is particularly good at blurring definitions of the word “terrorist.” It’d be easy to cop out with a wishy-washy finale, and it’s to everyone credit that doesn’t happen. Quietly understated and generally effective.