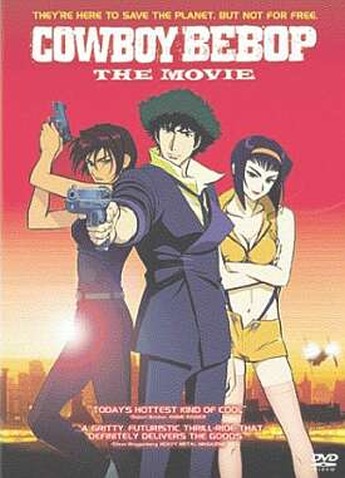 I was put off the Cowboy Bebop TV series by its awful title, which invoked images of freeform jazz-playing range-riders. I was wildly mistaken, though the music teeters on the edge occasionally, and the short shift given to characterization in this spinoff suggests existing fans will enjoy it more. The film takes place on Mars (albeit an apparently terraformed version, where gravity seems exactly like on Earth): when a terrorist demonstrates a bioweapon, and threatens to unleash more, the large reward attracts Spike Spiegel and his crew of bounty-hunters. Tracking the perpetrator uncovers a plot involving both the armed forces and a drug company, and leads to a showdown on Halloween – though the best anime set that night remains the Dirty Pair episode.

As mentioned, this hits the ground running, without much explanation – who, what and why is the very strange young girl that’s a team member? I suspect some characters (Jet Black in particular) are only present ‘cos they were in the series, and seem superfluous here. Luckily, the plot is smart, intelligent and enough to hook you, information seeping out in such a way as to make the viewer keen to learn more. No denying the effort on the animation either, it’s suitably cinematic and impressive, albeit sometimes gratuitous, as in an unexplained jet chase. But there just isn’t much particularly animated about this – it could easily be a live-action film. Not sure if that’s a compliment or an insult; either way though, I’m now more inclined to take a look at the series.