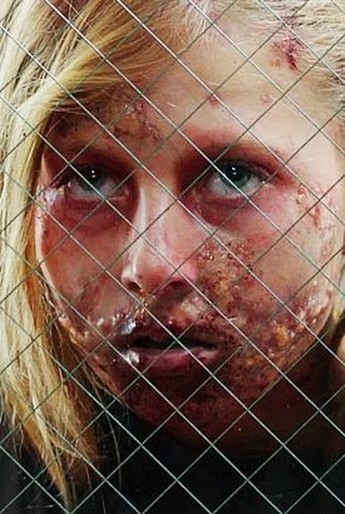 Always happy to endorse films which contain copious quantities of violence against children, and this seemed potentially like a match made in heaven. Infected chicken tenders make their way into the canteen of a summer school, and it’s not long before the kid who eats them is chewing on the face of a classmate. Not exactly the first day substitute teacher and wannabe novelist Clint Hadson (Wood) wanted to have, as he and his colleagues, including old flame Lucy McCormick (Pill) and her boyfriend, PE meathead Wade Johnson (Wilson), have to fend off the resulting hordes of flesh-hungry pre-teens. For it turns out, the virus in question only affects those who have not yet hit puberty, as the resulting surge in hormones is an effective antidote. Not that this is much help, when you are trapped in the music-room of a school that has strictly enforced an unfortunate “no cellphones” policy. [I should point out they missed a golden opportunity for a “gratuitous violins” joke in this scene, an omission for which I am forced to dock their score, along with the failure to mention Die Hard when they’re crawling through the school’s air-ducts]

It’s a shame the film doesn’t have the guts to plunge full-bore into a potentially demented premise: the restraint and (relative) good taste generally exercised here are about the last thing the film needs. I have to say, I was disappointed on that score. What was a pleasant surprise, however, was Wilson’s portrayal of Johnson, and that character’s development: he starts off as a real asshole, but by the end of the film, he has become the group’s saviour, setting fire to kids and watching them burn in his mirrored shades. I don’t think I’ve seen such a spectacular arc for a horror character since Ash in the original Evil Dead. Oh, and he gets to call Elijah Wood a hobbit, which is nice. The film also feels kinda unfinished: the sudden fade to credits made me wonder for a moment if I had fallen asleep and missed the ending (it appears there was an alternate cut that may have helped tie things up). It is adequately entertaining, with a brisk pace and some decent effects. Yet it somehow feels more like a missed opportunity than a fulfilled one.