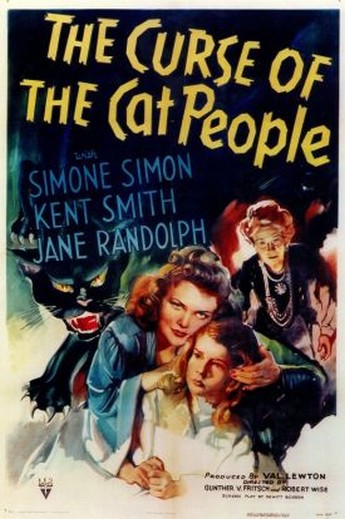 Often overlooked, this may have been the victim of studio interference, and was certainly the victim of a misleading advertising campaign, aimed at making it seem like a horror movie. Which it isn’t at all: indeed, even its status as a sequel to Jacques Tourneur’s Cat People is doubtful; producer Val Lewton initially wanted to call it Amy and Her Friend. Though I can see the studio’s point there: whole more accurate, it’s hardly a sales pitch. Lewton appears to have put a good bit of himself into this, with the location (Tarrytown, by Sleepy Hollow) where he grew up and one of the sequences, involving a hollow tree becoming a post-box in childhood fantasy, also being drawn from his childhood.

It’s a far gentler movie, and almost entirely chaste, in sharp contrast to the original’s repressed sexuality. Set a few years on, Oliver Reed (Smith) has gotten over the events which saw his first wife, Irena (Simon) apparently go insane, and has remarried, this time to former co-worker Alice (Randolph), the “nice girl” from the first film. They have a daughter, Amy (Carter), who is hugely imaginative, to the extent her father is concerned about her. That’s especially true when she starts telling of what her parents assume is an imaginary friend – one who bears an increasingly disturbing resemblance to Irena.

I think credit is due here for going in such a thoroughly different direction for the sequel. This has an innocently charming, child-like vibe – but with occasional hints of menace. This is less expressed by Irena than the mother-daughter pairing who live in the spooky, old house nearby; the mother is a retired actress and kind to Amy, but fervently believes her own daughter died many years previously, and is not the imposter who lives with her. This, frankly, seems to have arrived from a completely different film. The film’s directorial credit came about after von Fritsch shot only half the script in the allotted time, and Wise (then an editor) was allowed to make his own debut. You really can’t see the join, and it’s a shame this will always be in the shadow of its better-known parent, for there is plenty here to enjoy, on its own terms – providing you are definitely not expecting more of the same.