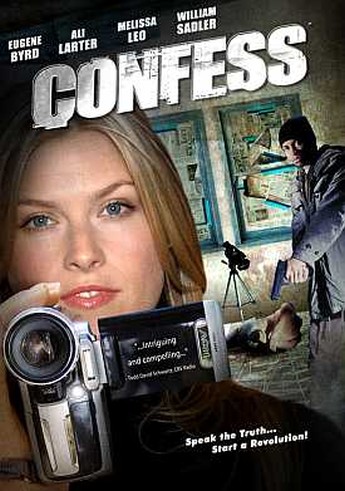 The theme here is the use of the Internet as a revolutionary device. After his mother is laid off, Terell (Byrd) gets revenge on the CEO by filming his sexual indiscretions through a webcam and uploading the footage to the net, where it become a cult hit. From there, he moves on to create other videos that similarly expose the corruption and hypocrisy of politicians, industrialists and those in positions of power. This creates a neo-revolutionary movement, with Olivia (Larter) acting as the public face, and he extract confessions about a system he views as corrupt, unjust and alienating. However, Olivia’s aims are different from his, and the actions of those who follow in his footsteps also present Terell with a moral dilemma – he realises he has created a monster.

It’s a good concept, and is likely to cause a good deal of discussion, even if reality has, to a certain extent, caught up with and passed the film since its original conception – it dates back to before 9/11. Recent events like the Haiti UFO footage [YouTube is your friend] have shown the power of the Internet to spread information, both real and fake, for good or bad, and the film captures the double-edged nature of technology very nicely. Terell’s change from slacker to revolutionary to media star to…well, let’s just say that’s not the last of it, is a nice arc, though the ending is somewhat too neat and tidy. I also suspect the government would be somewhat more aggressive, given his actions, than is actually shown – you just don’t do this kind of stuff and expect to walk away. Still, rather more intelligent and thought-provoking than the usual Net-thriller, which has to count as a pleasant surprise.