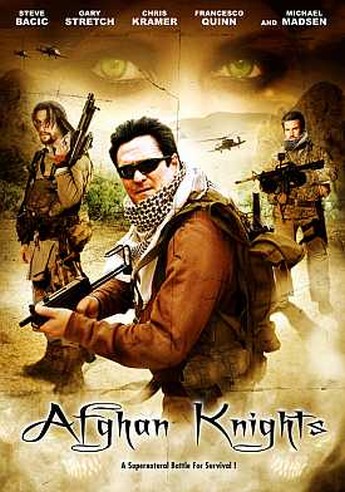 It’s difficult to pull a complete 180-degree turn in the middle of a film, and head off in a new direction. From Dusk Till Dawn managed it; Afghan Knights does not. It starts off as an action film, with former special ops man Pepper (Bacic), now a tormented wash-out, is lured back to Afghanistan by Nichols (Madsen), with the hope of finding his missing brother-in-law, though the mission to extract a local warlord. An SAS officer (Stretch) is added to the team, and his cavalier approach both threatens the mission, and hints at a hidden agenda, after he instigates a fire-fight with Pakistani border guards. Then, however, the team are trapped in a cave system, and the film suddenly becomes a horror-film: Pepper’s brother turns up…or is it? And there are glimpses of a white-cloaked figure lurking in the shadows.

Which is where the film grinds to a halt. Harmon doesn’t have a bad eye for the action elements above ground, even if it’s remarkable how much Afghanistan looks like British Columbia. However, a horror film requires a totally-different set of skills, and these are apparently alien to the director. While the premise is vaguely intriguing, there is just no tension generated at all, and the interest level rapidly descends towards a flat-line. Stretch isn’t bad as the near-psychotic wild-card, and Madsen plays the same character as ever, cashing his cheques with stoic indifference. However, Bacic never comes close to turning the hero into any more than a collection of cliches, and the end result is entirely forgettable.