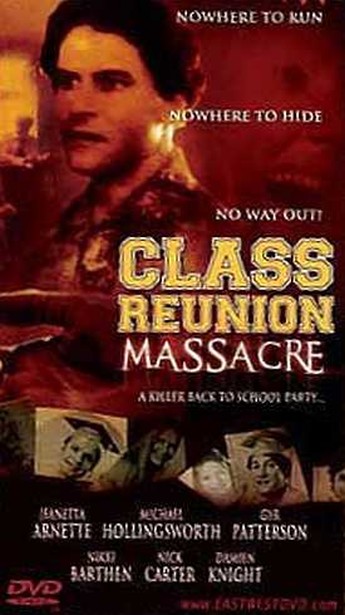 I enjoyed this one more than Chris, for whom its main saving grace is that it wasn’t Andy Milligan’s Carnage, with which it shared the DVD: two movies for 99 cents! That one definitely makes Class look like a blockbuster, despite a really, really bad, over-dark transfer. The original title makes more sense, especially towards an ending that we needed to watch twice in order to make any sense out of it. For the most part, however, it’s relatively straightforward: six former high-school colleagues find themselves invited back to a reunion. But they soon find out they are the only guests, and are locked into the deserted educational establishment, and offed one by one for their sins, which vary from homosexuality through to being a lawyer.

I liked the surreal quality here, and the primitive synth soundtrack [by Phil Gallo and Clem Vicari Jr.] helps the atmosphere too. Nice to see a killer with an actual philosophy, even if it’s just the usual, loopy religious nonsense, and he has a sense of style to match, dressing up as everything from a clown to a redneck hunter in order to stalk his victims. The film could certainly have used more gore, and I can’t say there were any real surprises on the way to the strange finale [is having an extra thumb the mark of the Beast or something?]. Only Arnette, here playing the somewhat slutty – but remarkably-clothed – Cindy, appeared in anything significant after this, and the acting is about as good as you would expect from that, and the fact that the killer (Finkbinder) now teaches high-school English. Overall, though, it didn’t suck as much as I feared it might, and proved to be passable entertainment, as well as an interesting precursor to the following decade’s Slaughter High.