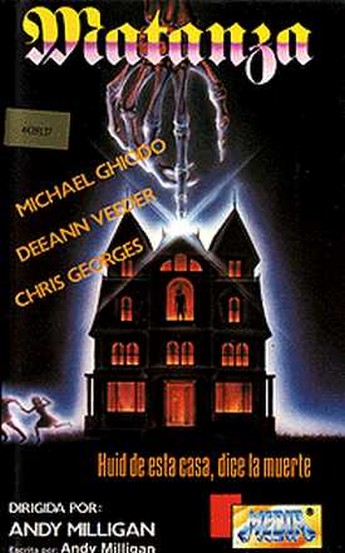 Milligan is one of the most infamous low-budget horror auteurs, though somehow – surprising, given my fondness for such things – I managed to avoided his entire output until being lured into picking up this one, by the tag-line, “See…kitchen appliances slice and dice…people!!!” Milligan made 27 features from 1963 through to his death in 1991, many of which them are now lost. And, going by this one, the rest of his output probably should suffer the same fate. The first scene, featuring a murder-suicide between a groom and his bride, is actually quite spooky; the last one, too, bookends the film nicely. However, the 85 minutes in the middle…woefully inept, on just about every level.

Three years after the deaths mentioned above, newly-married couple Carol and Jonathan (Dooven and Chiodo) move in, but literally don’t have time to put the kettle on, before the restless spirit of the dead bride is making her presence felt. Initially, these are minor annoyances, like putting cups in the sink or playing the gramophone at odd hours, but the activity, inevitably, escalates into much nastier stuff. Well, when I say “much nastier”, I mean, as nasty as can be managed, when your special effects are limited, almost entirely, to bits of string from which objects can be dangled. However, to say this cramps the film’s style, would be to imply that it had much style to begin with – unless you’re forgiving enough to include the use of spaghetti as intestines, inside your definition of “style”.

I think the moment we realised exactly why Milligan is so notorious, came when Carol says to a visiting repairman, “I’ll see you out”. She proceeds to walk with him, out of the kitchen, to the front door, through the garden, down the steps and to his car, then turns round and retraces her route. It’s a scene stunning in its utter pointlessness. From there, the film degenerates into idiocy – not that it had far to go. While I can just about accept the ghost turning murderous, I have to ask, what the hell does it do with the bodies afterwards? By the end of the movie, we’re discussing a significant amount of rotting flesh in need of disposal. Remarkably, other reviews, from those who’ve seen other Milligan works, suggest this is likely among his most mainstream works. The mind doesn’t just boggle at that, it begins whimpering and demanding a nice lie-down in a dark room.