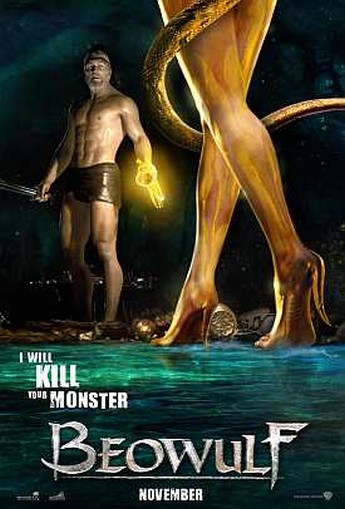 This romp through one of the early classics of English literature takes some liberties with the storyline [not least, tying the final dragon to Grendel’s mother], yet still ends up being entertaining and surprisingly – given the motion-capture technology used to turn the performances into animation – well-acted. If the technique occasionally seems superfluous, it also beefs things up in some appropriate ways; I’ve never seen high-heeled feet before… Hero Beowolf (Winstone) heads to Denmark to save a local king (Hopkins) and his wife (Penn) from the monstrous Grendel, which he does by ripping its arm off. That, understandably, peeves Mommy (Jolie, in perhaps the most slinkily sensual animation since Jessica Rabbit), who curses the hero with near-immortality. Decades later, when Beowulf himself has become a king, the curse completes its path.

The animation is very effective, though they still have problems getting hands right [that’s been the case at least since Final Fantasy]; that aside, the medium lets the actors act, rather than feeling like avatars. It is somewhat difficult to see Winstone as an uber-hero: remembering him from Sexy Beast, everytime he yelled “I am Beowulf!”, we were tempted to respond, “No, you’re not, you’re a fat cunt.” Still, once you got past that, it’s rousing and epic cinema, creating a nicely-detailed world that combines the historical and the mythological. It’s also being released in 3D: the cinema we went to didn’t have this, and occasionally we’d nudge each other as something particularly gratuitous came out of the screen. However, that technogimmick isn’t required, and if you enjoyed 300, this should tickle the same sword-and-sandal nerve.