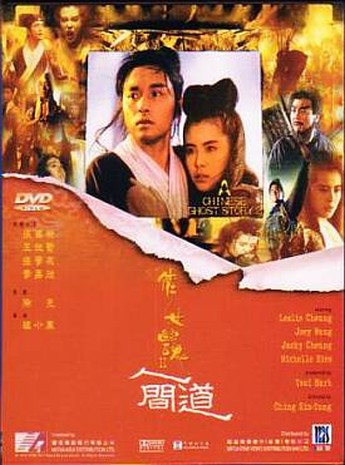 Our heroic tax-collector, Ning Tsai-Shen (Leslie Cheung) is still unable to stay out of trouble for long! His first encounter is with the bounty-hunters seen in the original, who mistake him for a wanted criminal and haul him off to jail despite his protests. He is thrown in beside Elder Chu (Ku Feng), a philosopher and author who has found he has less trouble with the authorities if he just stays in prison. When Tsai-Shen is about to be executed, Chu helps him escape through a tunnel – outside, he steals a horse belonging to Autumn (Jackie Cheung), a Taoist priest who follows using his favourite mode of travel, underground!

The two meet and sort out the confusion at the ill-named Righteous Villa, containing eight coffins, which gives Tsai-Shen bad vibes. Justifiably so, it seems, as a coffin lid starts to move… Tsai-Shen runs into the forest, where ghost-like forms appear, but after Autumn demonstrates his ability to freeze people with a spell, the pair discover the spirits are a guerilla band, led by two girls Windy and Moon Fu, the former of whom (played by Joey Wang) bears an uncanny resemblance to Tsai-Shen’s love in the first film. They’re trying to rescue their father Lord Fu, who is being taken in chains to the Emperor. They mistake Tsai-Shen for Elder Chu in disguise, mis-interpret a poem he’s carrying as instructions on how to rescue their father and rush off to do so.

Ning and Autumn are left behind – Autumn tries to teach Ning how to use the ‘Freeze!’ spell, but Ning gets it slightly wrong and manges to paralyze Autumn instead – unfortunate, as this is the moment the creature from the coffin, looking a little like Rawhead Rex, chooses to appear. This leads to a hysterically funny scene where Ning tries to discover from Autumn, who can only communicate with his eyes, how to dispel the magic while simultaneously trying to avoid the monster.

All the plot elements come together, as the guerilla band, the soldiers transporting Lord Fu, Autumn and Ning and the Emperor’s High Priest all arrive at the villas at more or less the same instant. To give away much more of the plot would be a heinous crime (ok – I fell asleep and missed a bit, c’mon, it was a late-night showing!), but it includes demonic possession, vampirism and an enormous centipede.

Virtually all the cast are back, together with director Tung, producer Tsui Hark and a $26 million dollar budget, and the results are suitably spectacular if perhaps a little lacking in the ‘narrative coherence’ department (the resume above was the result of combining two people’s interpretations and extracting common factors!). Unlike the original, which built steadily to a climax, this one plunges in at the deep end and this does mean that the ending is something of a let-down. It’s still breath-taking stuff, however, with all the elements we’ve come to expect from Tsui Hark movies. Relentlessly entertaining, let’s hope it gets a better release than the original did.