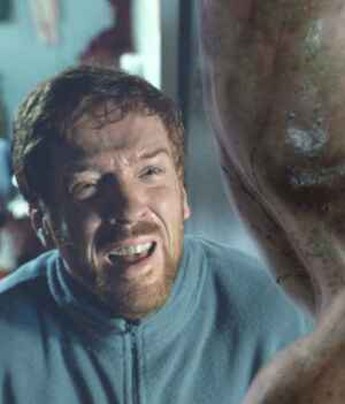 Or Stand By Thing, as it perhaps should be known, crossing Stephen King’s earlier film with John Carpenter’s classic alien invasion movie. It’s an uneasy marriage which doesn’t quite work, and would perhaps have been best left as two separate movies. You have four teenage kids in Maine, wandering round, getting into trouble, then you have them as adults, stumbling into an alien crash site, being “sanitised” by the possibly psychotic Colonel Curtis (Freeman, borrowing Lam Ching-Ying’s Mr. Vampire eyebrows). Oh, and the foursome can now read people’s minds, which comes in especially handy for Henry (Jane) when his pal Jonesy (Lewis) is taken over by an alien – which, for some reason speaks with an English accent.

The monsters are very cool, shifting their appearance to whatever seems appropriate, and I also liked Jonesy’s mental warehouse, where he keeps his memories and in which he hides from the alien inhabiting his body. Was firmly behind Curtis, and his take no prisoners approach, though like much of the movie, he seems lifted from somewhere else. More paranoia, given both the alien’s abilities and the secret army unit, would have been welcome, but the main flaw is a lot of lazy writing. Perhaps as a result of condensing a 900-page book, many plot points are never satisfactorily explained, such as the cause of the accident that almost kills Jonesy, and the “psychic friends” thing is distinctly creaky. Plus, if I was atop a toilet containing something lethal and nasty – something that wants out – I wouldn’t be concerned about getting a toothpick. Was this in King’s book, or did William Goldman and Kasdan add it for the movie? Either way, they’re not novices, and we expect much better.