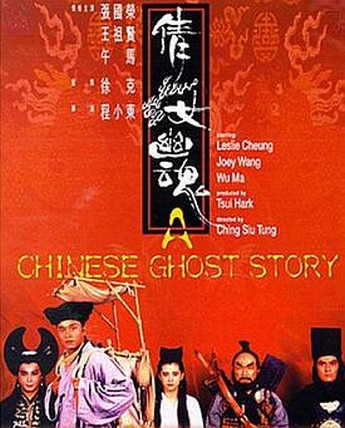 This was produced by Tsui Hark (who was born in Vietnam but studied at the University of Texas before going to Hong Kong), the director of a string of successful movies beginning with The Butterfly Murders, the proceeds from which were used to set up the Film Workshop production company with his wife. This specializes in films combining traditional and modern elements – stories are often based on Chinese folklore while the camerawork is straight out of the box marked ‘Sam Raimi’.

Director Ching Siu Tung had no formal training, but worked his way up the cinema ladder, beginning as a stuntman, then being given his own action sequences to direct before finally graduating to a fully fledged feature with Duel to the Death. While there may remain a nagging feeling that Tsui Hark is as much responsible for the final product as Ching Siu Tung was, it’s all totally irrelevant to anyone’s enjoyment!

As you might expect from a film which credits five action choreographers and four cinematographers, it’s both action-packed and visually stunning. The pace gradually accelerates in each fight scene from the first, which is almost standard kung-fu material, to the last, a climactic battle in hell itself which is unlikely to resemble anything you’ve seen in a Western movie. Gravity rarely seems to operate in the same direction for two successive camera shots, and the editing is absolutely lightning-fast – fifty or sixty cuts per minute is not uncommon. All of this takes place in a curiously indeterminate era, only to be found in the movies; it’s generally historical but with just enough anachronisms to make you wonder.

The story is from a collection of Ming Dynasty tales, which also provided the inspiration for the earlier A Touch of Zen. A traveller, in the film a tax-collector, spends the night in a disused temple and sees a beautiful girl there. Unsurprisingly (if you’ve read the second paragraph), she turns out to be a spirit and the rest of the movie concerns his struggle to allow her soul to rest in peace. He is helped and hindered by a Taoist priest, an odd bloke with serious sword skills and a tendency to rap Taoist philosophy. He’s played by Wu Ma, a director in his own right – his films include The Dead and the Deadly. Hero Leslie Cheung, on the other hand, is in ‘real life’ a pop idol with a slightly effeminate image – the local equivalent of Jason Donovan, say.