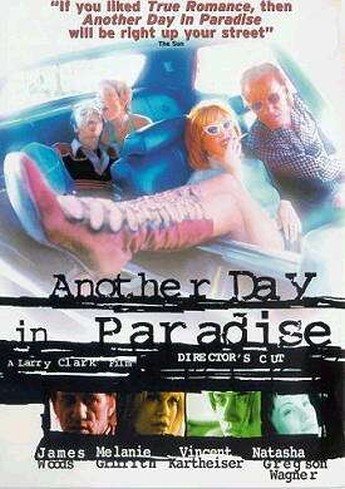 A largely unlikeable set of characters are redeemed by a blistering performance from Woods, playing junkie safe-cracker Mel. He takes teenage couple Bobbie and Rosie (Kartheiser and Wagner) under his wing – Bobbie is initially delighted to be out of breaking into vending machines, and they steal a large quantity of drugs from a pharmacy. Things go askew on the sale (with hindsight, it perhaps wasn’t wise for Jewish Mel to tell redneck jokes to a gang called “Hitler’s Henchmen”…) and it’s pretty much downhill from there.

This is a portrait of perhaps the ultimate dysfunctional family, with pharmaceuticals the glue that binds them together. It’s hard to like, or even relate to, such a bunch of losers: Mel’s character has more depth, still functioning on a higher level despite his addiction, and the only thing standing between his “family” and oblivion. The rest of the cast hardly scratch the surface, though the script doesn’t give them much else to work with – however, Lou Diamond Phillips’ uncredited cameo is memorable. Not exactly a barrel of laughs, Clark apparently has a disturbing interest in showing Kartheiser naked. But James Woods is always worth watching, and this is the kind of role into which he can get his teeth. He is spectacularly good, the rest of the movie, less so.