Oh, baby!! Let me catch the frickin’ bone with my teeth! As soon as I heard the stylish Shirley Bassey-ish opening theme, I knew I was in for a ride and a half. Move over James Bond: with wrestling midgets, stool sample coffee, Scottish fat bastards, In Like Flint phones, and inventive movie references, this movie has got to be one of the funniest I have seen in a long time. I don’t think I’ve EVER seen a sequel better than the original…oh, yes, I have, Aliens…but let me tell you, they are few and far between. Yet this is a riotous romp through the 60’s and the 90’s with cross references all the way around that will have your head spinning. The penis descriptions alone had me dying. Mike Myers is a genius. Period. 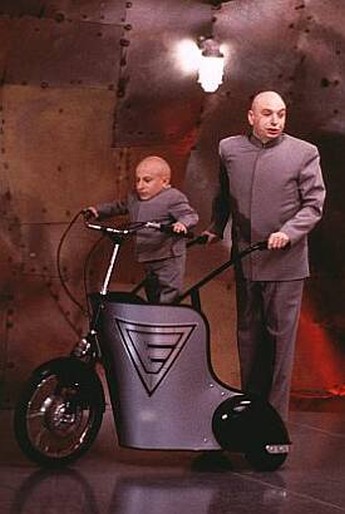 There is just too much in here to start naming what I liked. I enjoyed it all, the scenery, the furniture, the photography, the balance of the characters and of course, the Jerry Springer show. The Fat Bastard from Scotland had me crying every time his disgusting demeanor graced the screen. He was unbelievable.And speaking of which, I have to warn those of fragile stomachs: it’s not coffee. Just remember that. And close your eyes, because he will drink it. I wish someone had told me that before. I nearly gagged and called Ralph on that one scene that had the audience squirming in their seats.

Heather Graham was her usual cute, adorable self and the costumes were so outrageous that I want to go shopping: I want to dress like that again. Did I say again? YES, I DID! I ADMIT IT! I was a child of the 60’s and I’m proud of it! I owned a miniskirt that was black and white checkered, so there! Seth Green (famed as werewolf Oz on Buffy the Vampire Slayer – the movie and the TV series) was superb as Scott Evil, trying to make amends with his asshole dad (“That’s Dr. Evil to you!”). Dr. Evil was delicious: the best evil, mad, stupid scientist who ever lived. And where on earth did they find that midget? He looked great! Plus, spotting the cameos was a pastime in itself.

Director Jay Roach did the first Austin Powers and has had some limited writing and producing credits in the past, namely Blown Away starring Jeff Bridges and Tommy Lee Jones [He’s presently working on a film version of The Hitchhiker’s Guide to the Galaxy, a favorite of mine, which I’m keen to see].

I was surprised to see so many obscure references that may make no sense whatsoever to our friends across the pond in the UK, but hey, the rest of the lines, the gags, the story and that midget held up the obscure parts beautifully. Just make sure you DON’T leave after the end cause there’s a little more that runs during the credits that is worth staying for. [I’m a die-hard stayer anyway and have found lots of interesting stuff over the years presented just for the benefit of our kind.] The music was great and the party scenes were so like the show Laugh-In that it makes me think they will bring that show back for a goof. Enjoy this movie: I know you will. Oh baby… Make love to me Monkey Man!