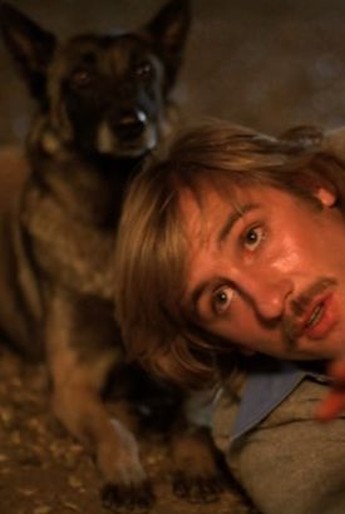 It’s probably the nine-year-old in me, but I was amused how the lead character in this film is called “Dr. Ferret”. Now, being French, the t is silent, as in “ballet”, but that doesn’t help the subtitles, and I had to repress a snigger every time his name is mentioned: it’s just one of those words which I am unable to take seriously. I’d like to apologize to the makers of this solid French thriller, in which the good doctor (Lanoux) arrives in what appears to be a suburban city, and finds the inhabitants increasingly divided. Half, concerned about their security, are lined up behind Morel (Depardieu), who provides patrols of men with attack dogs that roam the streets. But others, soon including Ferret, feel that it’s sacrificing too much liberty, with the dogs being used to terrorize immigrants and the young. When the mayor, a noted opponent, is “accidentally” mauled to death by a dog, Ferret decides and Morrel must come to heel.

At first I thought this was some kind of political allegory, with the dogs perhaps representing fascism, and a totalitarian ideology. Turns out I may have been overthinking it a bit, since at the time this came out, the situation in question was a very real issue in France, with an increasing number of Alsatians – the dogs, not people from the Alsace region – being used for personal protection. That aspect may have passed, but what’s left is a strongly creepy vibe (which reminded me of early Cronenberg), helped by the eerily empty, concretist suburb in which this is set; rather than a bustling town, the only people in the film, are the characters. Jessua builds up the tension with a series of small incidents, each of which can be dismissed as trivial, yet point to a troubling pattern, and asks the question: would we rather be safe or free? It’s a difficult one, especially in a society where not everyone’s answer will be the same. And, while the fashions may be dated, in a post-9/11 world, the film’s topic is perhaps more globally relevant than ever.