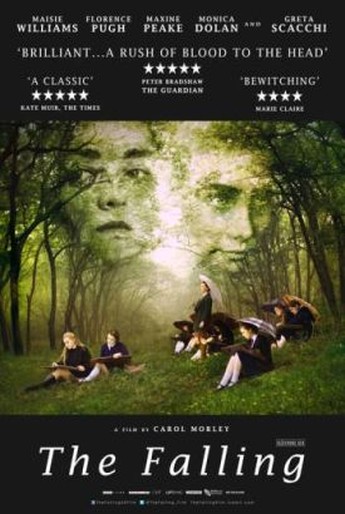 I think this might be one of those films which needs to be watched in exactly the right state of mind, when you are in the mood for something atmospheric rather than logical: imagine an English version of Picnic at Hanging Rock and you’re not far off. Fellow pupils at their last sixties school, Lydia (Williams) and Abby (Pugh) are more than best friends, but when Abby decides she’d rather be with Lydia’s brother, and tragedy strikes out of the blue, Lydia develops a tendency for fainting fits. In what appears to be an episode of emotional contagion, the tendency starts to spread, first through the small group of which Lydia is the emotional leader, and then into the rest of the school.

Yeah, that probably comes over as a rather crap, terse synopsis – but let’s be honest, it’s a rather crap script, at least in terms of story, being much more interested in the characters and their interplay than progressing a plot. It just about manages to hang together, thanks to attractive cinematography and solid performances from Williams and Pugh, even if the former is so much associated with her Game of Thrones character, early on, I had to keep suppressing an urge to yell “Stick him with the pointy end!” By the end, however, I had got past that, and was intrigued by the character of Lydia, who is both clearly intelligent, and extremely manipulative. Nowhere is this clearer than a scene where she is being probed by a psychiatrist, and it’s apparent she is entirely aware of the situation, and deflects each question with the ease of the practiced liar.

However, for every scene like that, it seems there are five in which, literally, nothing happens, creating another strong urge, to yell “Get on with it!” at the TV, and Tracey Thorn’s songs appear ludicrously out of place for the supposed sixties setting. Other reviews are full of words like “dreamlike” and “enigmatic”, and whether those should be taken as a warning or an encouragement is likely dependent on the viewer’s expectations and inclination at the time. Chris hated this. I didn’t hate it, though would certainly have liked to see a stronger grasp of narrative, rather than something which perhaps has more in common with the Wordsworth poems it quotes. But if you’re seeking confirmation that teenage girls are strange, alien creatures, this has it in spades.