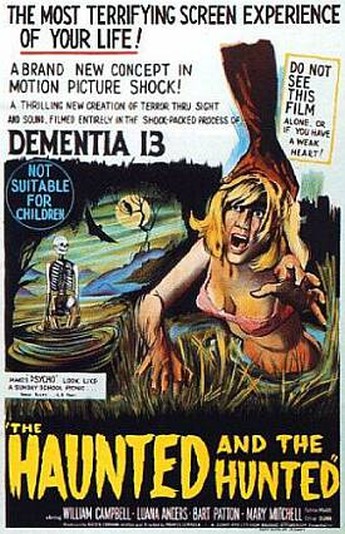 Coppola’s first “proper” feature – he had made a couple of nudies – was the result of producer Roger Corman having a bit of spare cash and the use of an Irish castle, after an earlier film came in under budget. He asked Coppola to come up with some kind of Psycho knock-off, and this script was popped out in a few days. In particular, the set-up copies the early stages of Hitchcock’s masterpiece, with Louise Haloran plotting to cover up the death by heart-attack of her husband, so she can still profit from his family’s wealth. However, while working on a scheme to drive the matriarch (Dunne) insane, who still mourns the death of her daughter in a drowning accident years earlier, Louise ends up falling victim to an axe-wielding psycho. Who might it be? One of the remaining brothers, such as Billy (Patton), who is still troubled by nightmares of his sister’s demise? Or John, a sculptor with a sharp temper and fondness for blowtorches. Family servant, Arthur? Cheerily “eccentric” local poacher, Simon? It’s up to the abrasive family doctor, Justin Caleb (Magee), to untangle the web of deceit and psychological disorder.

To be honest, you can tell the script was thrown together on the back of a Guinness beer-mat, after a couple of viewings of Psycho. However, Coppola doesn’t have any apparent way to tie the strands into a coherent finale, instead coming up with something which a drug-crazed Dario Argento would likely have rejected as implausible. It’s much better teasing out those strands, Coppola generating more atmosphere than in others of its ilk. It’s helped by Magee’s excellent performance, both acerbic and intelligent, with the good Doctor being one step ahead, not just of the other characters, but mostly of the audience as well. That kind of smart-assery can easily become irritating – I’m looking at you, Benedict Cumberbatch – and credit to Magee that isn’t the case here. If this certainly isn’t great art, and likely not even very good among B-movies, it’s a lot better than it should be, considering the impromptu nature of its origin, and serves its purpose perfectly well.

[What we said then: Aug 2004] The jewel here is Coppola’s directorial debut (though it’s hardly a exclusive to this particular set), and initially, it’s an effective Psycho knockoff, with the central character not who it appears at first. It centres around a family of Irish nobility, tormented annually by the insistence of its matriarch, Lady Halloran (Dunne), on marking the anniversary of the drowning of her young daughter. But when a gold-digger arrives, intent on getting the mother to change her will, it triggers more than tearful regret – specifically, the rampage of an axe-wielding killer. It falls far short of the glorious pull-quote on the poster: “Makes Psycho look like a Sunday School picnic,” though it’s hard to see how any film could live up to that. While it opens well, the story soon collapses into people meandering around the dark corridors of the family castle. There are occasional breaks for grim, if not particularly gory, murders by the aforementioned loony, before a rushed ending that fails on almost every level. Magee stands out as an inquisitive doctor, sinking his teeth into the melodramatic dialogue with a relish not matched by the other performers, who make little impression. For a debut, it’s competent enough, even if little suggests that Coppola would go on to win Oscars for the likes of The Godfather or Apocalypse Now. D+