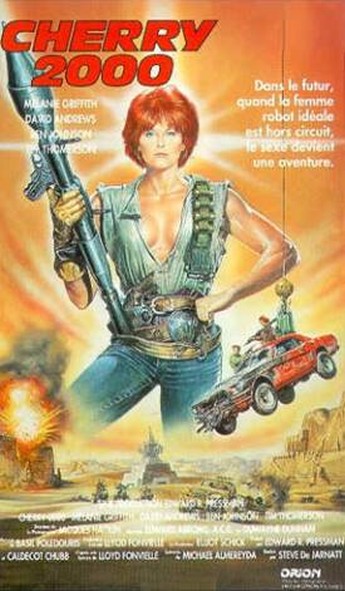 It’s strange how futuristic movies can look dated so quickly: barely a decade old, this one’s view of the 21st century looks about as plausible as Metropolis. If you can get past that, this is a strange but appealing SF flick, which has Andrews employing Griffith to track down a replacement for his robot wife in the desert wilderness. Eventually, of course – and this is so obvious that it’s not a spoiler – he decides that nothing beats a real women i.e. Mel.

For what’s really a B-movie, it bats fairly heavy, with Michael Almeyrada (Nadja) having done the script, and music from Basil Poledouris – also look out for Larry (now “Lawrence”) Fishburne in a tiny role. But it’s Thomerson who steals the film with one of the most off-the-wall psychos I’ve seen in a long while. De Jarnatt would go on to do the utterly sublime Miracle Mile: there’s no signs to suggest that here and Andrews is certainly no Anthony Edwards; yet, on its own, Cherry is a quirkily original little number.