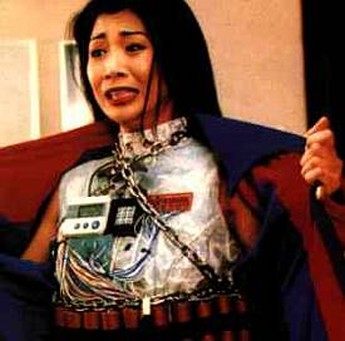 Although there’s nothing outstanding about this film, which is largely a piece of fluff, I confess to a sneaking regard for it. Everyone involved seems to putting in the effort, particularly Chow and Carrie Ng (of Naked Killer fame) as the two central beweaponed-babes. It starts off extremely chauvinist, with the lady cops shrieking in terror when they fire their guns, but that angle is given short shrift, and they then prove to be well up to the task in hand.

Specifically, nailing Triad boss Ng Man-Tat, who is fond both of making furniture, and wielding a very large hammer on any undercover cops sent to infiltrate his group. While there’s not a lot new here (the Inspector Wears Skirts series does the same sort of thing, with superior action from the likes of Cynthia Rothrock and Moon Lee), it has a nice, genuine feel to it, with quirky characters that I liked. It’s limited, knows it, and so doesn’t over-stretch itself.