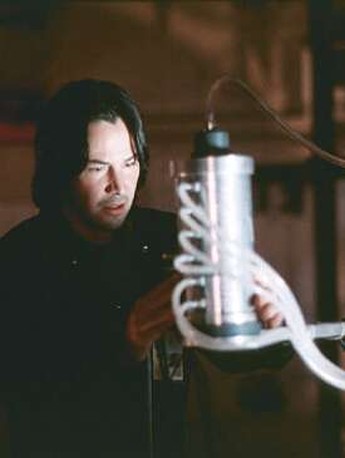 Keanu Reeves plays a scientist who…okay, you’re already snorting with derision, and probably with good reason. Some people were born to play intellectuals, and Mr. Reeves isn’t one of them. He can just about get away with the opening, as a fairly-low member (a machinist) of a project that discovers how to get energy from water. When forced on the run, thanks to a government plot to cover up this information, he’s kept busy ducking and diving: not a problem. But the finale suddenly requires him to reprogram entirely the computers in a top-secret installation – that choking sound you hear is your disbelief not being suspended.

The background cast is good: Ward as the FBI agent trying to unravel it all; Freeman, the project head, and Brian Cox as his Black Ops counterpart. Unfortunately, Reeves (and to a lesser extent, fellow “scientist” Weisz) is just not convincing, and this cripples the film. From a conspiracy angle, interesting to note the bad guys are the government – there’s almost no mention of the companies who’d have most interest in suppressing a free energy device. Of course, this was 1996, when the president wasn’t an oil industry puppet. [What Clinton was, is really outwith this review!] Nice explosions, though if you want to keep an invention quiet, is destroying eight blocks of Chicago the way to go about it?