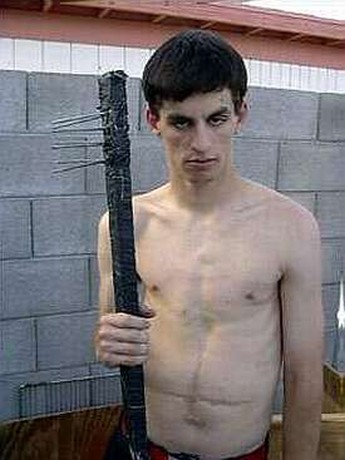 Backyard wrestling is by no means new: as a teenager, Mick Foley staged bouts, including an infamous leap off a roof. But the Internet made it notorious, with “federations” across the world competing for extremity. Hough’s documentary looks at the characters involved, from the semi-sane to the frankly disturbing; he also talks to their parents and schoolteachers, and pro wrestler Van Dam, who is rather more ambivalent.

You can watch on several levels, most obviously, the “Holy Shit!” appeal of seeing someone set on fire with lighter fluid (after they rip their shirt off, their skin continues to burn). On a technical level, you see it’s not mindless brawling, involving imagination and surprising discipline: most participants know the line between minor damage and permanent disability. Deeper still, it’s often a response to trauma of some kind; for example, Scar (then with Tucson’s HIW – he now wrestles with the SWWF, whose next event TC is sponsoring) spent much of his early life on the edge of death in hospital, due to illness – which does explain his fearless approach.

Critical probing of this mindset would have been welcome; as is, those opposed to it are hardly shown at all. It also loses focus when it follows the dull side-story of The Lizard’s attempt to make it onto Tough Enough, the WWE’s reality recruitment show. But when it stays with the title, the film is both eye-popping and thought-provoking.