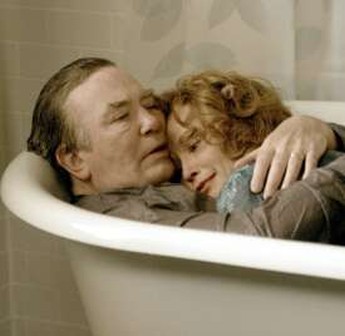 After Apes, it’s nice to see Burton returning to the smaller, more personal films with which he made his mark. The result is a lot more engaging, yet there’s something which prevents it from being fully satisfying. The set-up is intriguing: Will (Crudup) is estranged from his father Edward (Finney) by the latter’s tall tales, but they are re-united by imminent death, and the son’s desire to see who his dad truly was. There’s an element of stunt casting, with a supporting roster of cameos – Steve Buscemi, Helena Bonham-Carter, Danny DeVito (plus supposedly Faye Dunaway and Julianne Moore, though I missed them!) – which distract more than enhance. Speaking of distractions, did wonder about Finney and McGregor, from Manchester and Perthshire respectively, playing an Alabaman; ditto Bonham-Carter, born in Golders Green.

Fortunately, the central love story is simply beautiful: perhaps the problem is that Burton didn’t realise what a gem he had. Hence, young Edward (McGregor) also works in a circus, befriends a giant, discovers a spooky town, is a war-hero, a sports-hero, etc. While impeccably told, they go well past what’s necessary and together, regardless of whether or not they are “true”, there’s a certain point beyond which the net effect is a loss of credibility. If Burton had reined in his imagination and stuck to the core romance, the end result could have been wonderful, rather than merely pretty good.