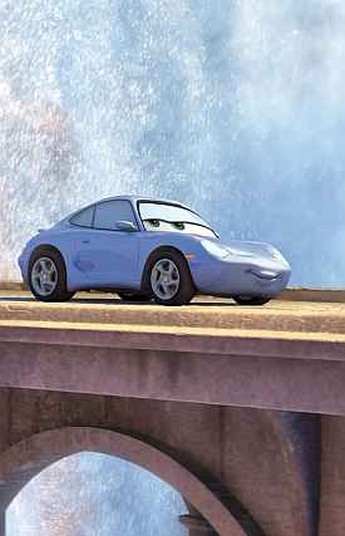 I hate NASCAR. It’s a boring spectacle, vastly over-rated, and its immense popularity here in America baffles me. I was therefore left unsurprisingly cold by Pixar’s latest entry, which centers around a car competing for the Piston Cup, who gets stuck in a rural town the week before the deciding race. In this world, there are now human or animals; just different varieties of cars; even the flies are little winged automobile. This permits a fabulous level of invention – it’s just a shame that it’s largely wasted on such a tedious spectacle as NASCAR. In addition, the central plot is somewhat by the numbers, too: as the characters appear, you already know how they’ll fit together, and what will happen at the end.

That said – and this is easily my least favourite Pixar film – it’s still a very pleasant ride through the car nation, with animation easily up to the company’s high-standard. In particular, when two cars go for a leisurely drive through the countryside, it becomes almost photo-realistic, and it’s hard not to think they digitally added cars to a real landscape. Purely as a technical achievement, this is very easy to watch, and while there are no obvious standouts among the voice actors, they all do their jobs solidly, and with professionalism. Even the celebrity cameos work nicely, rather than obviously grinding the film to a halt. At 116 minutes, it is definitely too much, especially since the plot is straightforward: it certainly doesn’t need to be that long, though is hardly a chore. Coming from any other company, this would be a small triumph; unfortunately, my standards are that much higher for Pixar and this can only be classed as a disappointment.