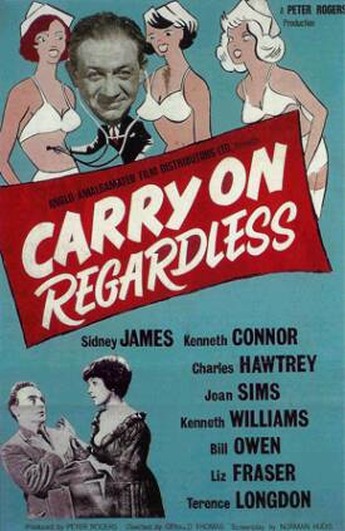 While retaining the almost sketch-based nature of the early film, the setting of a “no job refused” employment agency, lends itself well to this: the usual selection of quirky characters get sent out on a variety of very odd assignments. Around them is a supporting cast that’s almost an all-star team of 60’s Britain: Fenella Fielding, Nicholas Parsons, Patrick Cargill, Molly Weir and former Light-Heavyweight World Champion Freddie Mills (a friend of the Krays, who ended up shot in the head). Perhaps the best such cameo is seeing Stanley Unwin speaking his trademark gobbledegook, to the utter befuddlement of James and his secretary.

As in Sergeant, James is the glue holding the film together, which again gives him limited opportunities for comedy. However, he does shine in one sequence when mistaken for a famous doctor, and we get to hear his lecherous laugh for the first time, which lights up the film like a firework. Joan Sims also has a great scene, totally sloshed after misinterpreting the point of a wine-tasting, and most of the skits are at least amusing – though some, such as the Home Improvement Exhibition, lack any structure and never amount to much. The comedic highlight probably comes when Gabriel Dimple (Charles Hawtrey) is supposed to be moving someone’s pet birds, but is mistakenly sent to a strip-club. The results are absolutely classic Carry On:

Manager: What do you want?
Dimple: Your birds, and I can’t wait. Tell me, what sort are they?
Manager: What sort do you like?
Dimple: Blue tits. Have you got any?
Manager: No. No, this place is centrally heated.
Dimple: Ooh! Tropical birds!
Manager: We have got one from Ceylon, yes.