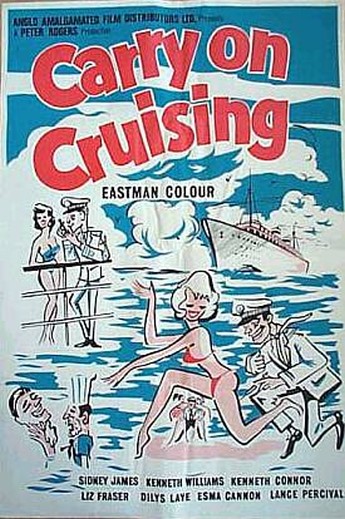 Look! It’s in colour! Just a shame the same can’t be said about the script or characters, which have little to offer as far as humour goes. James plays the captain of Mediterranean cruise ship, the S.S. Happy Wanderer. He has his eye on an Atlantic liner post, but gets stuck with a bunch of new swabs, including his first mate (Williams) and doctor (Connor), who persist in screwing things up every chance they get. If this sounds familiar, that’s because it is almost exactly the same, in both scenario and characters, as Constable and Regardless. Even when now in glorious colour, it’s not exactly fresh, and feels more like reheated leftovers, with a sprig of garnish in an attempt to give the impression of something new. It fails, much as the badly-integrated use of stock footage fails to convince you they ever left the Pinewood lot.

In other issues, there’s way too much reliance on people falling over and other slapstick, with only the odd moment of genuine wit. For example, Williams interrupts his captain’s statement that, “I’m going to use a psychological approach – I don’t claim to be a Jung man…” with the great riposte, “So long as you’re Jung at heart, sir.” James still hasn’t quite found his niche, as shown by the restrained reaction when a female passenger makes a pass at his character. Little wonder, then, that this was the final entry to be written by Norman Hudis; his scriptwriting talents, for the Carry On series, at least, were clearly running on fumes by this point.