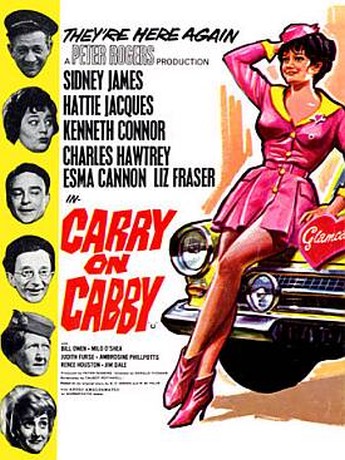 Back in black (and white), with new scriptwriter, Talbot Rothwell, bringing a whole new depth to proceedings. While James is still the “man in charge”, here he’s definitely a working-class hero, Charlie Hawkins, who runs the Speedee Taxis cab company. However, after missing his anniversary night out, his wife Peg (Jacques) decides to teach him a lesson by secretly setting up GlamCabs, which employs only dolly birds and uses the brand-new Ford Cortina(!), so steals away much of Charlie’s business. He’s not one to take that lying down, of course, and a full-scale feud erupts between the two companies. However, Speedee’s tea-lady (Fraser) relays all Charlie’s plots to Peg…

This wasn’t intended as a Carry On film – it was originally titled Call Me a Cab and only acquired its name at the last minute, due to a request from the distributors. That may explain why it’s less “obvious” than its predecessors, and indeed, for 1963, is pretty forward-thinking as far as roles for women go, and its view of the battle between the sexes. There’s no doubt who the smarter ones are here, though there is nothing malicious or harsh about the warm-hearted humour, and everything comes right in the end, naturally. This is probably more gentle sexual satire than anything else, and as such is inevitably a product of its time. Still, it works remarkably well, with Jacques in particular, seizing the chance to do some genuinely good acting.