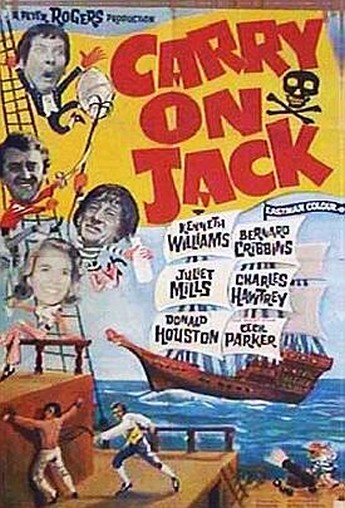 Like Cabby, this wasn’t planned as a Carry On; the original title was Up the Armada, until the censor objected! It isn’t very highly-regarded among fans, maybe because, outside Williams and Hawtrey, no regulars showed up for the series’s first jaunt into period drama (Liz Fraser was slated for the role played by Mills). The star is Albert Poop-Decker (Cribbins), a new midshipman who finds his identity stolen by Sally (Mills), on a quest to find her lover. However, both end up on HMS Venus, under the command of Capt. Fearless (Williams), whose name could not be less appropriate. Through a series of misadventures, they are all cast adrift and stuck in Spain, but as usual, everything ends up for the best, albeit with the count of limbs reduced by one…

Despite low opinions elsewhere, I liked it: for perhaps the first time, Williams gets the kind of upper-class twit role he was born to play, and takes full advantage. The finest moment is the fabulous face he pulls in the lifeboat, after realising the implications of the following: “Now, now: calm down! No hysteria! Try not to think that we’re all alone…on a shark-infested ocean…with nothing to eat…two or three hundred miles from land…and right off the shipping lanes.” Brilliant. Cribbins is equally good, a very sympathetic hero, and while Mills really isn’t fooling anyone dressed as a man, that isn’t the point. Donald Houston also deserves praise as the sadistic first officer, to whom both Fearless and Poop-Decker are devils incarnate. Overall, there are less “jokes” to be found here, but more amusing situations, and I found the overall effect to be solidly entertaining.