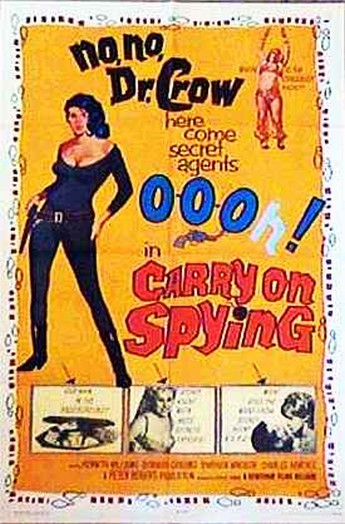 The spoofing here is more specific than usual, obviously targetting the Bond movies. Williams leads a team of inept agents, more (Hawtrey, as Charlie Bind, Agent Number o-o…oh – which almost provoked a lawsuit from the Broccolis, and forced the producers to change his first name from James) or less (Windsor, in her Carry On debut), as they try to recover a secret formula, and keep it from falling into the hands of S.T.E.N.C.H. They’re led by the evil Dr. Crow, played by Juliet Furze, but dubbed by John Bluthal, to weird but effectively villainous result. It’s back to b&w, for the last time, as a nod to film noir. The Third Man‘s another victim; to be honest, this side of things probably works better than the Bond elements – that series wouldn’t properly find its own feet, until the release of Goldfinger, six months later.

There’s no doubt Windsor hit the ground running, with exactly the right attitude to fit into the series, feistily naive, and totally oblivious of the effect she has on the opposite sex. Mind you, the sight of Bernard Cribbins dressed as a belly-dancer is one that will require a large helping of mental bleach. The film allegedly bips around Vienna, North Africa and the Orient Express, though it’s not exactly convincing, and the finale in STENCH’s headquarters is painfully overlong, not least for the lengthy reverse footage sequence. It does have what may be the first on-screen deaths in Carry On, when two guards shoot each other. I remember this one fondly from my youth, but in the harsh light of the 21st century, it hasn’t aged well.