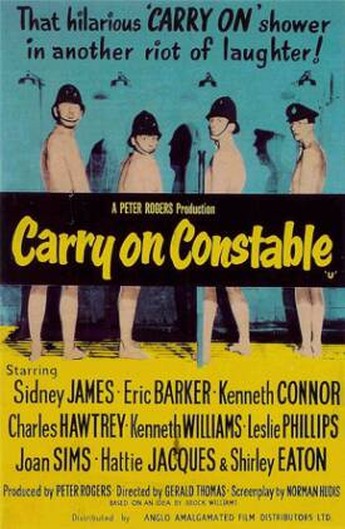 It seems strange now to appreciate that Sid James – the face and voice of Carry On – didn’t appear until the fourth entry in the series. He replaced Ted Ray here, and it’s impossible now to think of the movies without seeing his wrinkled features or hearing his deliciously dirty laugh. For his debut, however, James is in an almost unthinkably straight role, as the suffering police sergeant trying to keep a bunch of useless recruits from causing chaos, when they’re thrown in to relieve a station beset by a flu epidemic. And even by the standards of Carry On, the latter are shallow, barely caricatures: Williams plays a constable obsessed with physiognomy; Connor, a slave to superstition; Phillips, an upper-class twit.

These are not enough to hang a film on, and the plot is equally thin, little more than a sequence of incidents, many of which it is difficult to believe ever seemed funny. They even have someone slipping on a banana-skin – wasn’t that consigned to the Book of Cinematic Cliches back in the silent era? In the last ten minutes, a wages robbery is rapidly committed, investigated and – really, I’m giving nothing away – solved by our talentless coppers, more by accident than design. If that had been spread through the entire film, it might have helped glue everything together somewhat better, though future Miss Marple Joan Hickson gives an engagingly loopy cameo as a drunken old lady. The most memorable moment (beyond Phillips’ buttocks, which I’d rather forget!) is seeing a version of the 411 scam, done face-to-face. Guess it pre-dates Nigeria’s access to the Internet…