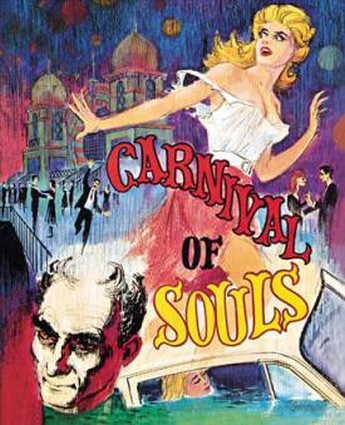 For some reason, this tedious piece of work has acquired a cult reputation; in truth, the obscurity in which it laboured for twenty-five years is entirely well-deserved. Mary (Hilligoss) is involved in a car accident; afterwards, she moves to take up a new job as a church organist, but is haunted by disturbing visions. First time I saw this, I worked out the “twist” inside ten minutes (if you care to find out, hover your mouse over the picture, right), and going in knowing it, made the whole movie a chore. Add a slew of unsympathetic characters – not least, Mary herself, partly because Hilligoss has all the emotional range of a paper plate – to camerawork and direction that rarely gets past the pedestrian.

The only sequence that achieves any kind of charge at all has Mary running around town, desperate for help, yet unable to achieve any kind of communication with the townsfolk. As a metaphor for the alienation caused by urban life, it’s extremely impressive. Unfortunately, I really doubt very much this is what was intended by Harvey, a man who spent his life making industrial/educational shorts with titles like Health: Your Posture and Why Punctuate. However, I suspect those are probably rather more entertaining than this badly over-stretched Twilight Zone episode.