I guess the rating is actually not bad, considering the vast bulk of this is two people (okay, three, if you include a child) sitting in a car, talking to each other. Bello is single mom Lorraine Burton, struggling to keep her head above water, for the sake of her son, Chad (Hill). She’s barely getting by, reduced to frozen gas-station pizza and buying fuel in six-dollar increments, while fending off the claim for sole custody of her estranged husband. Just when things couldn’t apparently get any worse, they do, in the shape of fleeing bank robber, Roy (Dorff), who takes up residence in her car and orders Lorraine to drive at his command, towards an uncertain destination and equally uncertain future. 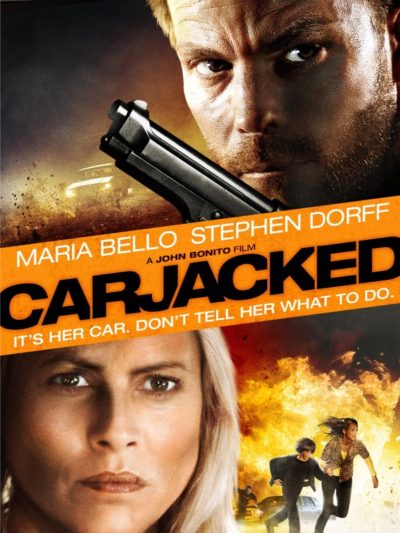 The actors are the best thing about this, with Bello and Dorff decent value and reasonably well-cast. [I also enjoyed Joanna Cassidy’s brief turn as an irascible group therapy participant] Dorff has always struck me as being a low-rent version of Kiefer Sutherland, and that’s not a bad thing, while Bello is generally capable of seeming very down-home and relatable. She does so here, despite a script that seems intent on piling cliches on top of the characters, in lieu of a credible story-line. I think I lost count of the points at and ways in which Lorraine could have alerted people to her predicament, yet is reduced to scrawling her car number above the door in a diner toilet and random incidents of reckless driving. “You’re a fucking train-wreck” sneers Roy to his hostage, and he’s not wrong. She is, however, a fucking train-wreck necessary to the plot…

The pair lurch between Stockholm syndrome and ludicrous escape attempts for most of the running-time, and it’s a shame, as some of the conversations between the pair are almost engaging. Then, we reach the final reel where the writers appear to have thrown up their hands and decided to write the ending while on peyote. That is about the sole way to explain what happens, as Lorraine demonstrates a previous unreported facility for the care and use of shotguns. While I know she was married to a soldier, he wouldn’t even let her vote how she wants. I doubt he provided shooting lessons.

I can’t say I didn’t enjoy the climax, because I absolutely did. How can you not appreciate a massive pile-up, with her car flying through the air and almost totalled, from which the unbelted Lorraine emerges with hardly a hair out of place? Or that school districts can identify pupils which aren’t even theirs, based entirely on a first name? I just wish this level of madness had been present throughout the entire thing. It’s a damn sight more entertaining than watching Lorraine get her inner angst out, and be told BS like “You have the right to be angry.” Compared to Right to be Angry Lorraine, Actually Angry Lorraine is a chick you’d want to hang out and do tequila shots with. But where the hell was she for the first 80 minutes?