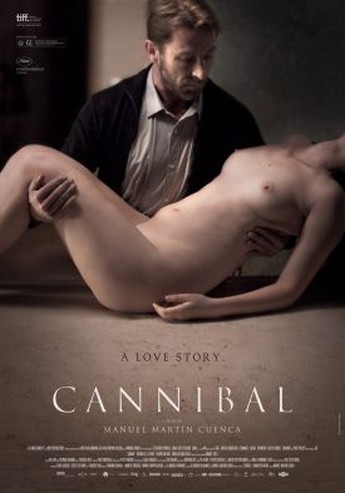 Carlos (de la Torre) is a successful and well-respected tailor in the Spanish town where he lives. Sure, he’s solitary to an almost obsessive degree, and his diet appears to be entirely carnivorous. But he’s polite, well-mannered and a credit to the community. Of course, there’s more to him than that – and since it’s in the title, it’s not much of a spoiler. He falls for an upstairs neighbour, Alexandra (Melinte), a Romanian who has a massage business, and invites her over for dinner, shall we say. When her sister, Nina (also Melinte) turns up on his doorstep to look for her missing sibling, it looks like a case of second helpings for Carlos.

Except, he starts to develop a fondness for her that goes beyond imagining how she’d taste with fava beans and a nice Chianti. But will that be enough to save Nina from the murderous impulses which apparently already claimed Alexandra? This is understated, to such an extent that it’s more like “not stated at all.” Anyone expecting anything gory or gruesome is going to be extremely disappointed: this is much more psychological, The main thrust seems to be about how a life shorn of love or even personal relationships of any kind, can go in a radically dysfunctional direction – and whether it can be placed back on the rails subsequently.

But it unfolds at a slow pace, to such an extent you find yourself drifting off to contemplating issues the film doesn’t address, such as how someone becomes a cannibal to begin with. I mean, you either eat people or you don’t. It’s not like bacon sandwiches are a gateway drug. Or wondering how much meat you can get off a normal body. That such thoughts don’t just stray across your mind during this, they hang about, checking the fridge for leftovers, tells you much about the low-key approach. While that’s not necessarily a bad thing, this just doesn’t do enough to retain your attention, and despite decent performances from both leads, you reach the end of the journey without having gained any real insight into… Well, anything much.