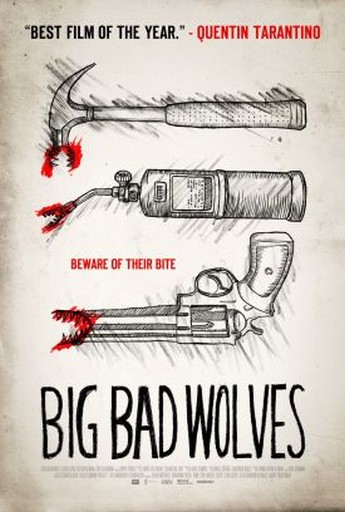 Someone is abducting and killing young children. Suspicion falls on Dror (Keinan), a teacher; desperate to solve the case, a detective, Micki (Ashkenazi) takes Dror to a warehouse and tries to torture a confession out of him. A video of the incident leads to his dismissal from the force, but he plans to kidnap Dror and get him to confess. However, both of them then are abducted by Gidi (Grad), father of one of the victims. He takes them to a remote farmhouse he has set up with the single-minded intention of finding where his daughter’s head is – Jewish religious law requires a body to be buried intact. You may have thought that Micki was a bit of a loose cannon, but that’s nothing compared to the raw intensity of a man on a mission, who will let absolutely nothing derail him from a rock-solid belief that he is in the presence of his child’s killer. Of course, whether that’s genuinely the case or not, is quite another matter.

Don’t be put off by the poster touting a quote from Quentin Tarantino. This is very solid, not least because unlike other entries in the genre, it leaves you uncertain until the last moment whether or not Dror is guilty. It’s a risky approach, because it results in the viewer not being able wholeheartedly to get behind Gidi’s vengeance – what if he’s wrong? However, this is less about the torture porn, or any thrill of raw justice, then the interplay between the characters, which occasionally strays into black humour. It is a little too cultural in nature – the point about Jewish funeral rites above was actually gleaned from Wikipedia – but the script is sharply written, and the character mainly avoid the easy clichés into which it would be easy to fall. Given the current situation in Israel, one feels the torture here is a symbol for… whatever, but that’s likely just coincidence. Sometimes, a blowtorch is just a blowtorch.