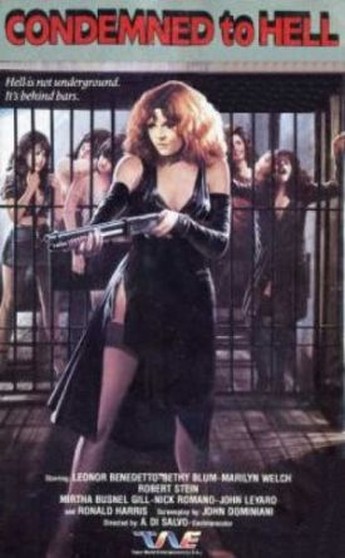 A fairly straightforward WIP film from Argentina, this has Silvia (Benedetto) being sent to jail for her involvement as the getaway driver in a robbery which saw her boyfriend shot by police. It isn’t long before she rubs resident queen bee Susana (Perissé) the wrong way. Susana has some nice schemes going, with the aid of a couple of corrupt guards, and a local gang boss on the outside. Anything that comes in to the prison becomes her property, to be distributed on a whim, and she also runs drugs in for her blockmates and pimps them out on occasion. Silvia resists, and pays the price; worse still, her innocent young sister is also targeted by the mob boss. Understandably, Silvia is more than peeved about this, and hatches a plan in conjunction with another guard, who is also fed up of Susana’s shenanigans: the inmate will be let out for one night to wreak revenge, but must return by the time the shifts change in the morning.

It’s the final element which is the main wrinkle here, with the rest largely being a selection of the usual tropes and stereotypes of the genre, offering a mix of gratuitous nudity and moderate degradation. However, I was fairly impressed by the occasional use of monologues, in which the inmates tell Silvia how they ended up in prison, but to be honest, this mainly makes you realize how banal the main storyline is in comparison. Maybe they’d have been better off focusing on the elderly Holocaust survivor jailed for killing a Nazi sympathizer, or the pregnant woman whose entire life was one of abusive relationships. Otherwise, this mostly feels like a grab-bag of elements you’ve seen before, pushed together without much thought or imagination, and there isn’t much to identify it as Argentinian, while there’s even less to make it stand out from all the others of its ilk.