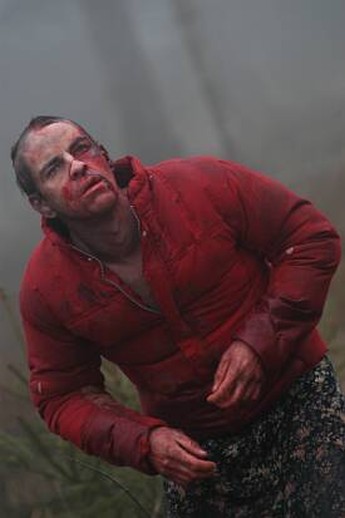 The “townsfolk vs. rural psychos” picture has been a staple of horror, from 2000 Maniacs, through The Texas Chainsaw Massacre, and rolls on in modern examples like Wrong Turn. You’d probably not imagine Belgium as a plausible location for an entry in this sub-genre, but Calvaire proves that any such assumption would be very, very, wrong. After his van breaks down, travelling singer Marc Stevens (Lucas) ends up in a remote hotel. At first, owner Bartel (Berroyer) seems like a nice guy – a little strange and lonely, perhaps, and missing his ex-wife Gloria, also a singer, terribly. And as Marc witnesses, Bartel is undeniably much more civilized than the rest of the locals. However, Marc senses his departure is being deliberately delayed and it appears that his arrival might just be the incident that tips Bartel over the edge of sanity.

“Freaky”, is probably the best word for this, and the film depicts a slow descent from normality into the depths of hell; even when rescue seems at hand for Marc, it’s just a detour on the road to even worse torments. It’s relatively restrained on the actual gore, but makes up for that in sheer psychological torture. Du Welz’s agenda is clearly different from the standard Hollywood horror film, with little attempt to flesh out Marc as a “hero”, and an ending which stubbornly refuses to tie up any of the loose ends. This is laudable on many levels, but I would prefer to have had the basic “Does he get away?” question answered in a less ambivalent fashion: there are times when structures are there for a reason. 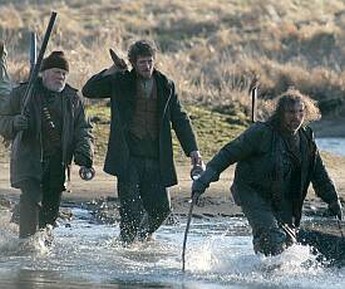 However, there is no doubt the departure from normal cinematic convention pulls the viewer out of the comfort zone, and aids the nightmarish feel of proceedings, since it leaves us with little or no idea what will happen next. Except that, whatever it is, will not be pleasant for Marc. You can’t help feel for the poor guy, since he’s entirely harmless, just trying to make his way in the world. But he’s clearly uncomfortable being the object of any affection, as is shown in an early scene opposite legendary XXX diva, Brigitte Lahaie. Perhaps this is as much a modern fable as anything else, a stark lesson on the dangers of talking to strangers, no matter how nice they may seem at first. Certainly, rural Belgium has now firmly been crossed off our list of potential holiday spots.