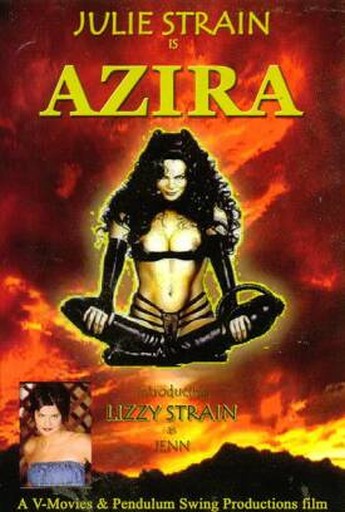 There’s a litmus test moment about 5 minutes in, when garage band Pink Velvet Envelope decide to raise money for their promo video. By putting on a topless mud-wrestling show. If you roll your eyes reading that, you can stop here, because this movie should not trouble your DVD player. If, on the other hand, it seems a fabulous idea, then this combination of blood and breasts will quite possibly be on your top 10 list for 2006. For on the subsequent shoot, a musician loses her virginity and the spilt blood awakens Azira (Julie Strain), a legendary evil who has been entombed for hundreds of years. Needless to say, she’s a bit peeved, and soon body parts are rolling. Fortunately, there’s a convenient mysterious stranger (Bilancio) who can explain what’s going on, but it’s up to Jenn (Lizzy – yes, Julie’s little sister) to slay the demonic presence.

My main problem is that it takes too long to get going: while there are flashbacks to Azira’s previous rampage, that and the mud-wrestling aren’t enough to balance the rather tedious band members and their witless ramblings. [Though I was fond of one who spoke largely in Shakespearean dialogue – sadly, there was no “Additional dialogue by W. Shakespeare” credit] There’s just too much padding, such as the sequence where they “borrow” a camera, and as a result Azira’s modern-day killing spree doesn’t kick off until well after half-time. When it does – mostly by possessing the band member who awoke her – the results are impressive: honestly, I’ve not seen death by drumsticks before. There’s also a really good decapitation, which merited “FM-RT!” status. Twice. 🙂

The plot may or may not stand up to close scrutiny: I could have sworn the stranger states they must take care of Azira before it gets dark, but the finale definitely happens well after sunset. No matter. Julie Strain fans will have a fine time, as she stalks around wearing little, if anything – and it may be her last film for a while, since I’ve heard she’s turning to motherhood. [Not sure about that, so I’ll skip the obvious, breast-feeding related comment] Lizzy makes somewhat less of an impression, probably connected to the fact that her clothes stay on; she does get to deliver a nice, almost Arnie-esque one-liner before the final battle. Oh, and the look of the film is cool, with fine cinematography by Dan Donley. All told, this is a B-movie; while depth and emotional impact are largely absent, it kept us entertained – presumably its main purpose. On that basis, this works efficiently and effectively.