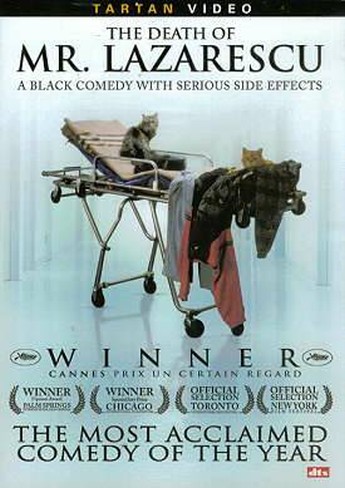 It’s 153 minutes long, in Romanian, has no real character development or structure, and the DVD extras include “Perspective on the US Healthcare system by Dr. Fred Berlin.” Even the sleeve doesn’t exactly try to sell the film: “After suffering terrible headaches which he can no longer bear, Dante Lazarescu finally calls for an ambulance. Accompanied by paramedic Mioara, who becomes his lone ally, Lazarescu begins his night-long journey in search of proper medical care.” Yeah, break out the beer and pizza! And still… This might just be the most effective piece of pseudo-documentary I’ve seen; it’s almost impossible to believe you’re watching actors, not real medical professionals. Gheorghiu, playing Mioara, deserves particular praise, for creating a character that’s so real, I’d have no problems letting her diagnose whatever ailed me.

The film is a savage indictment on an overloaded system – Mr. Lazarescu (Fiscuteanu) has the misfortune to fall ill on the night of a serious road accident – which doesn’t have much humanity left in it. Dante drinks? Well, that explains the headaches, now get him out of here. But as his symptoms become more obvious, even that causes problems; at one point, he’s denied surgery because he can’t sign the waiver, and his ramblings are taken as a refusal. You’re left shaking your head, and vowing never to get sick again. It is certainly overlong, and the sleeve’s description as “black comedy” is 50% inaccurate, since there is precious little humour in the situations here. Instead, it’s a masterpiece of how to turn budgetary limitations into strengths, with the entirely hand-held camera helping the hyper-realistic feel.

There’s a certain point in this, beyond which you’ll probably switch from being bored stupid, to being utterly transfixed – in my case, around the first hospital visit. After a bleak pounding of the viewer for 2 1/2 hours, the film leaves us on almost a hopeful note: despite the title (which seems like the biggest spoiler of all time), we never actually see the departure in question. Given his name, and some of the other characters in the film, such as Angel, perhaps a Lazarus-like resurrection is the final outcome? Regardless, it may have taken all night for him to go through the circles of hell, yet it’s clear that peace – in one form or another – finally awaits Dante at journey’s end. Take a seat, and accompany him: it’s a more interesting trip that you’d probably think.