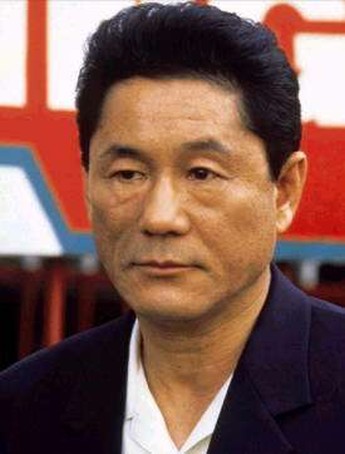 Yamamoto (Takeshi) comes to America, partly to see his brother Ken (Maki), partly to escape Yakuza problems back home in Japan. He finds America to his liking and proceeds to claw his way up the organized crime ladder, in a tidal wave of blood – until his irresistable force meets the immovable object of the Mafia. Cue more bodies hitting the floor. And that’s the main problem: characters are introduced two minutes or less before dying in a hail of bullets. Eventually you wonder if those who talk about desensitization have a point, albeit only with respect to other media violence.

Nominally English-language, large parts are still in Japanese, including almost all Takeshi’s dialogue. It’s reminiscent of his Sonatine, and the best moments here are subtle – Yamamoto cheating at dice – or introduce Yakuza culture to America, such as digit removal by errant gang members. Yamamoto and lieutenant Denny (Epps) have a well-handled, and surprisingly warm relationship, given their first encounter sees Denny getting a broken bottle in the eye. This illustrates the mix of emotion and ultraviolence the movie wants. It’s tricky to pull off in any language, let alone half in a foreign one, and the film eventually succumbs to an overdose of empty carnage. Still, it seems to have affected Chris: two days later she dreamt we had a baby with a Yakuza tattoo on its back…