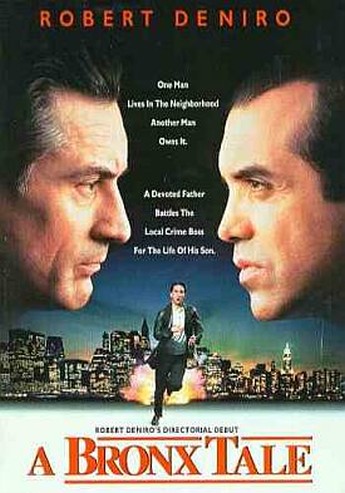 Based on Palminteri’s play, this rite-of-passage story centers around a kid who sees a Mafia slaying, keeps quiet, and so earns passage into the local hoodlums, much to the dislike of his bus-driving father (De Niro). Palminteri himself plays the local mob boss, from the Joe Pesci school of baseball bat carnage (and Pesci himself does a cameo), with his dismantling of a biker gang gloriously tough. It’s a great evocation of time and place, with the soundtrack album firmly to the fore, and is really at its best when nothing much is happening, as the atmosphere is entertaining enough on its own.

The attempt to add social commentary with a multi-racial romance seems crass, however, though perhaps it’s just that the actor playing the teenage hero (Brancato) is much less sympathetic than the one who plays him young (Capra). Ignore that, and this is largely amusing and thought-provoking – interesting to see De Niro, against type, as about the only person in the film who isn’t a gangster…