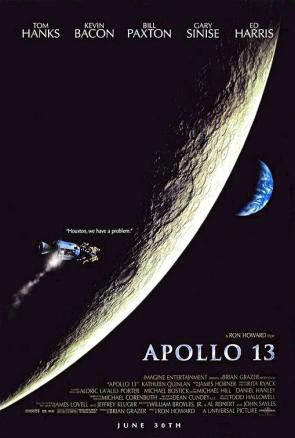 The problem with making films based on well-known events is an inevitable lack of suspense; everyone knows Apollo 13 came back safely, so a happy ending is inevitable. In such cases, the writer, director and cast need to work harder than usual to crank things up; unfortunately, while all do occasionally come through, it’s not with enough sustained effort to succeed. Tom Hanks and Bill Paxton are bland, cookie-cutter astronauts, with only Kevin Bacon coming over as more than a square-jawed hero, and Ed Harris paces Mission Control in Houston, doing the best he can with lines like “Failure is not an option!”

After a sluggish first fifty minutes, Lovell (Hanks) utters the immortal words, “Houston, we have a problem”, and things perk up a bit. The over-riding feeling from the rest of the movie is wonder, albeit only at how the hell we ever made it into space in the first place, with 1970 computer technology. You also have to admire how they faked outer space in a free-falling airplane, yet there is no room in all this for any empathy with the characters. The cold, hard and uncaring vacuum of space is a good place to leave them.