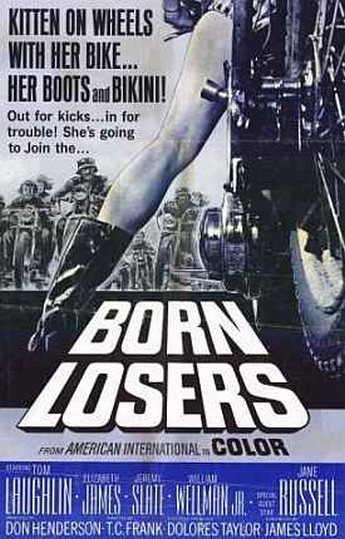 This prequel to the Billy Jack series introduced the titular character (Laughlin), a former Green Beret who tries to avoid using violence but, inevitably, finds himself neck-deep in it. Memo to Mr. Jack: this will happen when you make enemies of a motorcycle gang called ‘The Born Losers’. Especially when they’re being investigated for multiple rapes and are trying to intimidate the victims into dropping charges. And particularly when you’ve befriended one of their targets, Vicki Barrington (James, who wrote the film under a pseudonym). Though, I must say, her riding around wearing a teeny white bikini probably counts as contributory negligence in certain Southern states. It all ends exactly where you’d expect, with Billy Jack heading into the bikers’ clubhouse to rescue Vicki.

Firmly a product of the late 1960’s, complete with Jane Russell in an amazingly trampy cameo, it’s actually surprisingly even-handed, with even the bikers not all bad. Their leader defends his brother from their abusive father, though there’s some unsubtle gay overtones which seem severely out of place. At 115 minutes, it’s pretty long for a Samuel Z. Arkoff production and, truth be told, that’s more than the material probably deserves; the pace drops notably in the middle, just when you want it to career recklessly out of control. Instead, the film plods earnestly on, only occasionally rising to the delirious heights you expect or want. Loughlin’s impressively cool, and some of the secondary characters are fun – the useless local sherriff is played by Stewart Lancaster, who was the old man in Faster Pussycat! Kill! Kill!. That’s kinda thin pickings for two hours though.