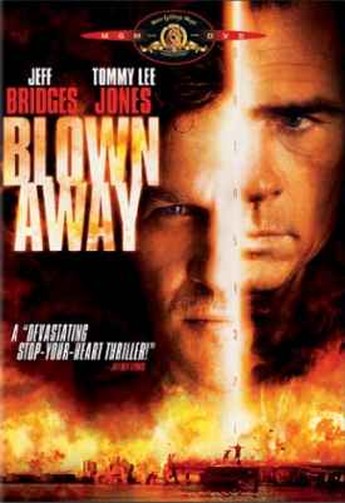 What I’ll remember about this film is not the plot, the characters or the very large explosion at the end. No, it’s the least-convincing “Guinness” I’ve ever seen – mostly because of the lack of any head. Any pub, especially a supposedly Irish one, serving it like that, deserves a good car-bombing. But then, this film’s portrayal of Celtic culture is limited to drinking, jigs and Jones’ escaped bomb-maker discovering a fondness for U2 (post-9/11, Bono must be embarrassed). He is after his former colleague Jimmy Dove (Bridges Jr.), whom he blames for 20 years imprisonment. Dove, meanwhile, renounced terror, and has a new identity in the Boston Bomb Squad, plus an amazingly bland wife and moppet. It’s all embarrassingly shallow as far as both character and storyline go, and as soon as you discover Dove’s wife is playing violin in an Independence Day rendition of the 1812 Overture, the rest of the film unfolds like a Death Valley highway.

It’s competent enough, and some of the action scenes are loud and dangerous – Bridges nearly bit the big one thanks to a mis-directed piece of shrapnel from one explosion. But it doesn’t stand the test of time well, and nor does it look good beside the other mad bomber movie of 1994, Speed. Now, obviously, they’re differently structured, Blown Away unfolding over a period of several months [in one scene, Dove proposes to his fiancee, and we see their wedding later on]. This less frantic structure should allow for a better stab at developing the central players, but it doesn’t seem to happen here. Pretty much everyone is exactly as they initially appear, with few hidden depths or subtleties, and the results are unengaging. Formulaic Hollywood action at its least inspiring.