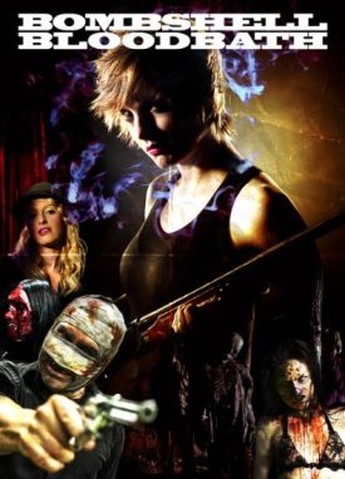 While it’s clear this is aimed as a throwback to the grindhouse era, and in particular, Italian zombie movies of the seventies and eighties, the fuel gauge on this hits “empty” after only about 20 minutes, and you’re left to endure, rather than enjoy, the remaining hour. Mad scientist Dr. Carter (Springer) is attempting to resurrect the corpse of his dead wife, but so far his formula has only succeed in generating flesh-eating zombies. Cara (Elliott) is shocked to discover what her father is up to in his garden shed(!), and us accidentally exposed to a smidge of his formula. But can both personal disaster and a potential zombie apocalypse be averted? Well, actually, there’s no real question there, since the film opens with said apocalypse already in progress, then flashing back to depict how the world came to reach such a point, courtesy of Dr. Carter.

Mullen certainly has the look and sound down to a T, with the print washed-out and faded in a way familiar to anyone who watched VHS cassettes of these kinds of films, back in the days before digital media and pristine transfers. The soundtrack (credited to “Umberto”, but let’s actually give Matt Hill the acknowledgment he deserves) is also spot-on, and might have been ripped from Goblin’s own studio tapes. Is that enough to sustain the movie? Not by a very long way, even as the film starts off being about the father, before suddenly shifting to focusing on Cara, and her quest to find an antidote, which drives her as far as a brutal home invasion. It’s rarely a good sign when a film tries to throw so many unrelated aspects into its script, indicating a lack of confidence in its individual elements, and here that concern is fully justified. Decent practical effects and some nice moments of atmosphere are unable to overcome the fundamental weakness in the storyline, and performances that are little more than functional. It doesn’t really live up to either component of its title.