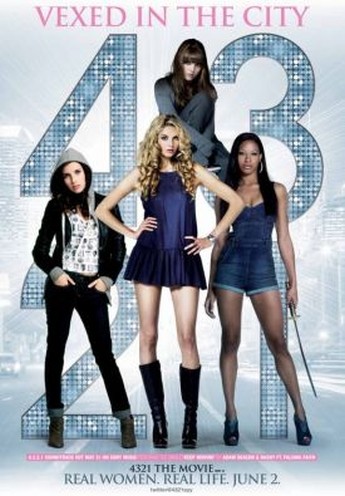 Given my knowledge of Clarke was largely limited to his role as largely uninteresting Mickey in Doctor Who, I was somewhat surprised to discover he has also a career as a writer and director. Though on the kinda-alright evidence of this overlong jumble, not sure I am that much more convinced as to his talents. It follows the stories of four teenage girls who meet at a diner before going their separate ways; the movie then follows each one over the next couple of days, before their stories link up again, with Shannon (Lovibond) threatening to jump off a bridge as the other three plead with her not to.

The sub-plots involve Shannon’s accidental involvement in a jewel robbery; Cassandra’s (Egerton) trip to New York to meet a man she met online, and to audition for a renowned piano school; Kerry’s (Warren-Markland) hijacking, with her girlfriend, of Cassandra’s apartment and their subsequent clash with her brother; and Jo’s (Roberts) family and employment troubles, mostly set around her unwanted shifts at a 24-hour mini-mart [which seems as good a place as any to mention Kevin Smith’s cameo as a courier].

Effectively, this structure makes it more an anthology than a single film, with the connections between the segments sometimes tenuous at best. For example, Cassandra’s section could be entirely removed (or slept through) without impacting the rest of things significantly, and given an unnecessary 116-minute running time, perhaps that’s what should have happened. The performances are also all over the place; while you get the idea this is intended to accentuate the individual characters, the effect is more that they seem to be taken from entirely different films, and you doubt whether these four would actually be friends in “real” life.

Still, occasional chunks do work – the mini-mart sequences in particular have a surprising engaging charm – and the plot’s coherence is likely better looking back, than it seemed at the time. While I’m not exactly the target audience here (likely twice its age), even taking that into account, this appears to mistake being ADHD for art, and seems to believe that having a large quantity of plot-threads is an adequate substitute for their quality.